A pregnant woman along with two others sustained serious injury when a leopard pounded on them in Guwahati on Friday.

The incident took place in the morning in Lokhora. The two year old leopard caused panic when it wandered into the densely populated residential area in Guwahati. It was later tranquilised by forest officials before being taken to the zoo. It was the fourth leopard attack in Guwahati this month.

22 Jan 2016 - 6:47pm | Hantigiri Narzary
The Songbijit faction of National Democratic Front of Boroland(NDFB-S) has expressed its firmed stand to continue its fight for sovereign Boroland against government of India. B Saoraigwra,president...

22 Apr 2018 - 2:27pm | Dibya J Borthakur
RAHA: A dreaded dacoit died and another sustained serious injury when a gang war took place in Nagaon on Sunday. The incident took place at Nagabandha in the wee hours where a group of armed... 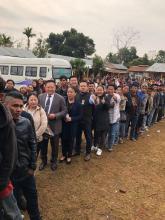