At least two persons dead and nine others sustained serious injuries when a roof of a hotel collapsed in Tezpur on Saturday. Several other workers have been retrieved hours after they were trapped. The tragic incident took place on Saturday evening near Mission Chariali when around 20 workers were engaged in the construction of a hotel building. A portion of the roof collapsed where two of the workers died on the spot. Thirteen others have been taken to the Tezpur Civil Hospital. Some others are still feared to be trapped inside the site. 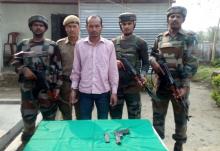 20 Mar 2016 - 11:06pm | Hantigiri Narzary
Security forces apprehend a NDFB(S) cadre from Basabil area under Gossaigaon PS on Sunday in Kokrajhar district. Based on information about the presence of the militant outfit cadres in the area...

One caught in theft Shillong case

15 Sep 2015 - 9:26pm | AT News
The Shillong police have picked up one Akeep Warjri of Mawprem Dymmiew and  charged him with stealing a music system in Mawkhar area on Tuesday. It took place at 11:30 in the morning where the...