One more Rhino killed on Wednesday evening at Mandir Chapori under Golaghat forest range. Poachers killed the rhino & take out the horn. After getting the report of shooting, the forest gaurds from Bonkuwal forest range reached the spot and seen a 4-member group of poachers running away crossing the Brahmaputra towards Gahpur. This was the third rhino killed in this month.

Last week one rhino was killed in Bijbali Chapori area in the Burhapahar forest range of the Kaziranga National Park. 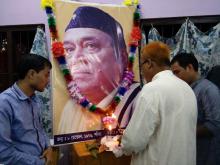