DrPhukan, who wrote many Assamese and Englishbooks, did his PhD from Leeds University, England, received aFulbright scholar at Yale in 1983-84. He also received the Krantikal SahityaSanman.

Twoothers from the north eastern region to have received the award are PremanandaMosahari for Bodoand Kshetri Bira, a novelist from Manipur.

8 Apr 2012 - 5:26am | editor
Assam assembly on Saturday observed its platinum jubilee in Guwahati where Veteran political leaders turned nostalgic. Speakers after speakers remembered the golden days of the House when it... 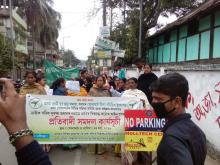 22 Jan 2016 - 7:05pm | Hantigiri Narzary
It is a mysterious condition that a 18-months-old male baby has been suffering of Hirsch Sprang disease following economic unsustainable of family to operation on his stomach which was made unnatural...