Earlier, a procession was taken out by the District Administration with devotional songs and beating of Khol – Taal etc. The procession concluded at Cultural Hall, Haflong and the different organization including office bearers of Dima Hasao Autonomous Council, District Administration took part in the procession. The senior citizen, Sri Somnath Upadhyaya and the Executive Member, Dima Hasao Autonomous Council, Sri Kalijay Sengyung also paid homage to Asom Ratna Dr Hazarika along with some foreign tourists. Vedic hymns were also cited by Pandit Somnath Upadhaya, a leading citizen and a devotee. Paying tributes to the departed soul, the Deputy Commissioner, Shri Dilip Borthakur, IAS dwelt shortly on the life and the contribution of Late Dr. Hazarika in different spheres of his music and scholastic activities. He also brought forth Dr. Hazarika’s love for humanism and his attempt to form a bond of love and affection, unity and harmony in between the people of plain and hills areas by citing some songs composed and sung by Dr. Hazarika and appealed to the people to follow the ideal of Late Dr. Bhupen Hazarika for maintenance of peace, harmony & unity which will usher in a new era of progress of the district. In the evening simultaneously with the sunset, the mortal remains of Late Dr. Hazarika were immersed in the sacred Diyung River near the District Headquarter Haflong amidst citing of vedic mantras in presence of hundreds of people. 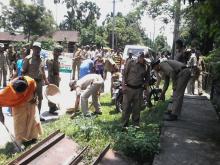 9 Jun 2016 - 9:43pm | AT Kokrajhar Bureau
Hundreds of trained homeguards join hands to the cleanliness drive campaign(Swachch Bharat Abhijan), being carried out to bring neat and clean environment in Kokrajhar district as well across the... 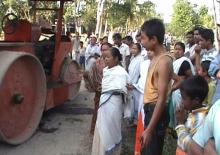