A six member delegation of the United Liberation Front of Asom discussed its charter of demands with the Centre in yet another crucial rounds of talks on Tuesday. Led by chairman Arabinda Rajkhowa, the team held talks with the home ministry officials including joint secretary attached to the north east Sambhu Singh at 3 in the afternoon.

Apart from the charter of demands ULFA placed before the Union home minister P Chidambaram in August, several other issues came up for discussion on Tuesday in presence of centre’s peace interlocutor P C Haldar. These include observance of ground rules, signed by both sides, surrender of arms and ammunition and total halt of operations by security forces against the pro-talk faction.

29 Aug 2007 - 6:25am | editor
Guwahati : The Cape Town-Kuala Lumpur Merdeka Expedition 2007 convoy arrived in Guwahati in Assam under tight security provided by the Indian army.The Bernama journalist who followed the expedition...

29 Apr 2015 - 5:12pm | Jyotirmoy Talukdar
Just as the Centre has renewed its mission of completing the Lower Subansiri Dam and also making many more Big Dams in Arunachal Pradesh by even extending the draconian AFSPA 1958 to Arunachal to... 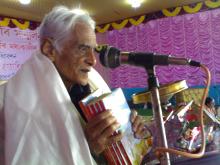