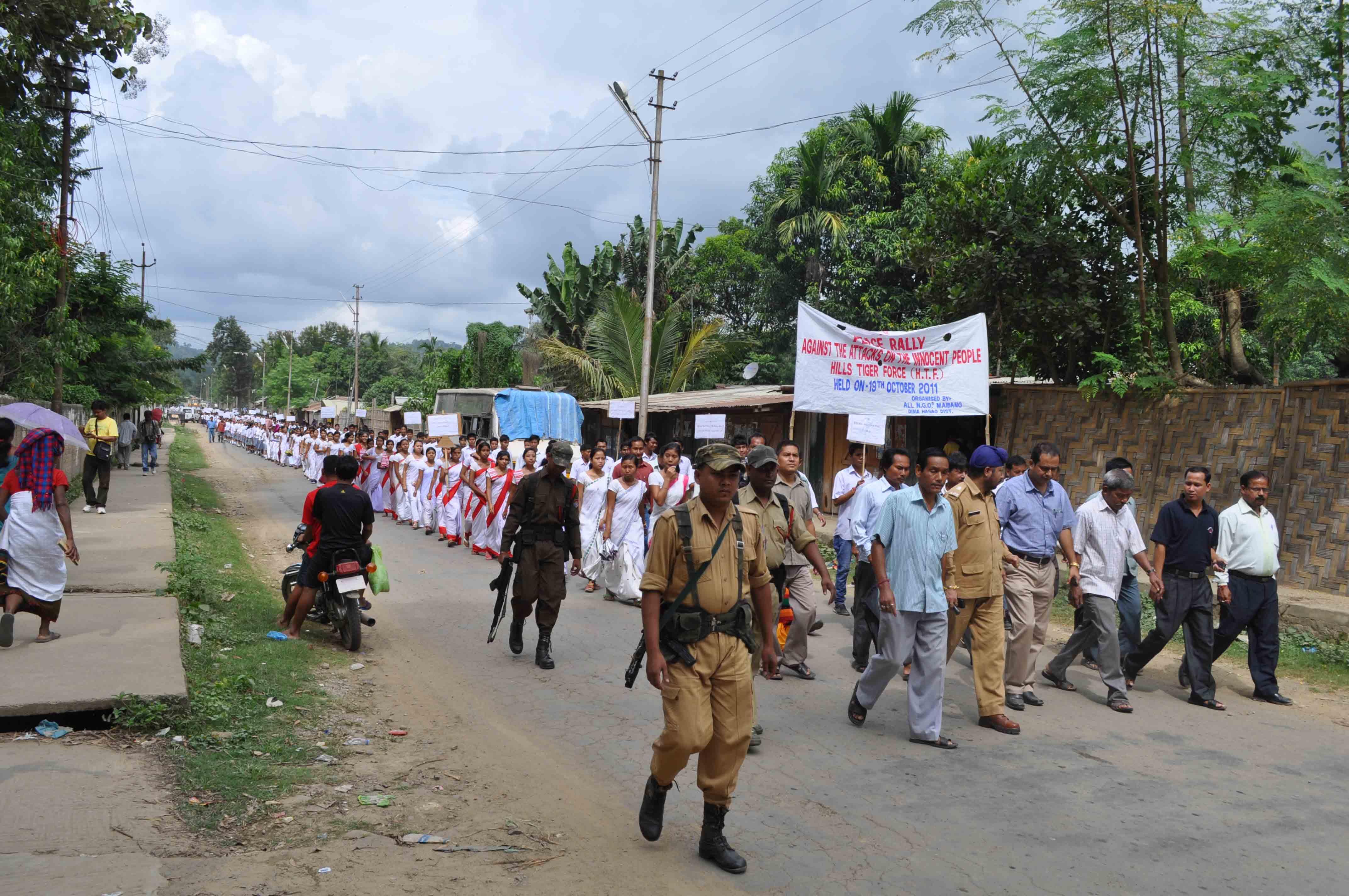 Thaosands of people of Maibang including school students and Senior citizens of Maibang take out procession from Dishru Playground at Maibang marched through the major parts of Maibang town.

Earlier on October 17th these organizations submitted a memorandum to the Deputy Commissioner, Dima Hasao through SDO (Civil) for deployment of security personals in the Dimasa villages like Tongkikhro,Digerkhro, Bongkai, Prasadimdik (Dimakhro),Didam, Drun, Semkhor, Path II,Yeah, Diduki, Thapa, Phaidmg, Jagdi and Natun Nobdi etc for providing protection against anticipated attack by the HTF. They also urged to immediately arrest the leaders of HTF and others involved in these ongoing acts of attack on the Dimasa villages to stop these evil acts which has disturbed the communal harmony amongst the people. The memorandum maintained that recently the inhuman activities carried out by the Hills Tiger

Force have created lots of chaos in the Dima Hasao Dist especially among the Dimasa people. A fear psychosis was prevailing among the general public Three Dimasa villages have been burnt down and one person has been killed other two persons have been injured by this culprits.

The Dimasa people residing in the neighbouring areas of non-Dimas; villages were passing their sleepless nights due to fear of sudden attack by the Hills Tiger Force. It is a matter of great surprise that within a span of three days three Dimasa villages have been burnt down by the evil miscreants. This so called outfit Hills Tiger Force has claimed the responsibility of these activities. These activities have disturbed the peace and tranquility of the entire district The Dimasa villages are being burnt down one by one. But why only Dimasa villages are attacked? What are the motives behind these inhuman activities? Why the innocent people are targeted? It is argued.

Sit-in for road uplift in Margherita on Dec 8

5 Dec 2017 - 7:48am | AT News
MARGHERITA:Despite plenty of natural resources Margherita has been lingering in the back stage of progress for decades. The huge coal town in the south east Asia region lacks proper infrascture even...

6 Aug 2011 - 2:39am | AT News
Bangladesh steps up procedures to deport ULFA general secretary Anup Chetia next week. But the authorities are tightlipped on the date. Security has been beefed up at the Rajshahi central jail have...