The depot in charge and weights in charge of FCI godown situated at Senchowa, Nagaon, Dipti Khatonia and Krishna Sarmah were detained at Haibargaon Police Station on Wednesday for questioning. According to sources the duo were allegedly involved in financial irregularties since many years. The truck owners association in Nagaon lodged a complaint with the police saying that there is a difference of weight in the weighing scale at the depot owing to which every time the trucks picked up lesser load from the said depot. When the weighing done at the destination was always lower than that at the godown weught.

After receiving the complaint, police started their investigation and found that the two officers have called a person from Guwahati to re- adjust the weighing scale today morning. The police is investigating the case further and it is suspected that few more persons may be involved in this. 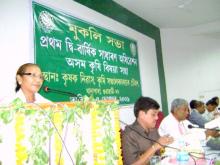 16 Sep 2009 - 1:09am | Mowsam Hazarika
The agriculture officers of Assam have decided to render more intensive extension service among the farmers to increase agriculture production in the State. In this context, altogether 195...

11 Aug 2008 - 7:54pm | editor
The Gauhati High Court on Monday granted bail to Peoples’ Consultative Group member Hiranya Saikia, who was arrested for ULFA link. According to information, the bail order came up when the...

18 Sep 2015 - 7:26pm | AT News
A B Tech student is believed to have committed suicide in the morning leaving the Guwahati IIT in utter shocked on Friday.Identified as Ujjal Salil, the body of student from Bihar was found at the...