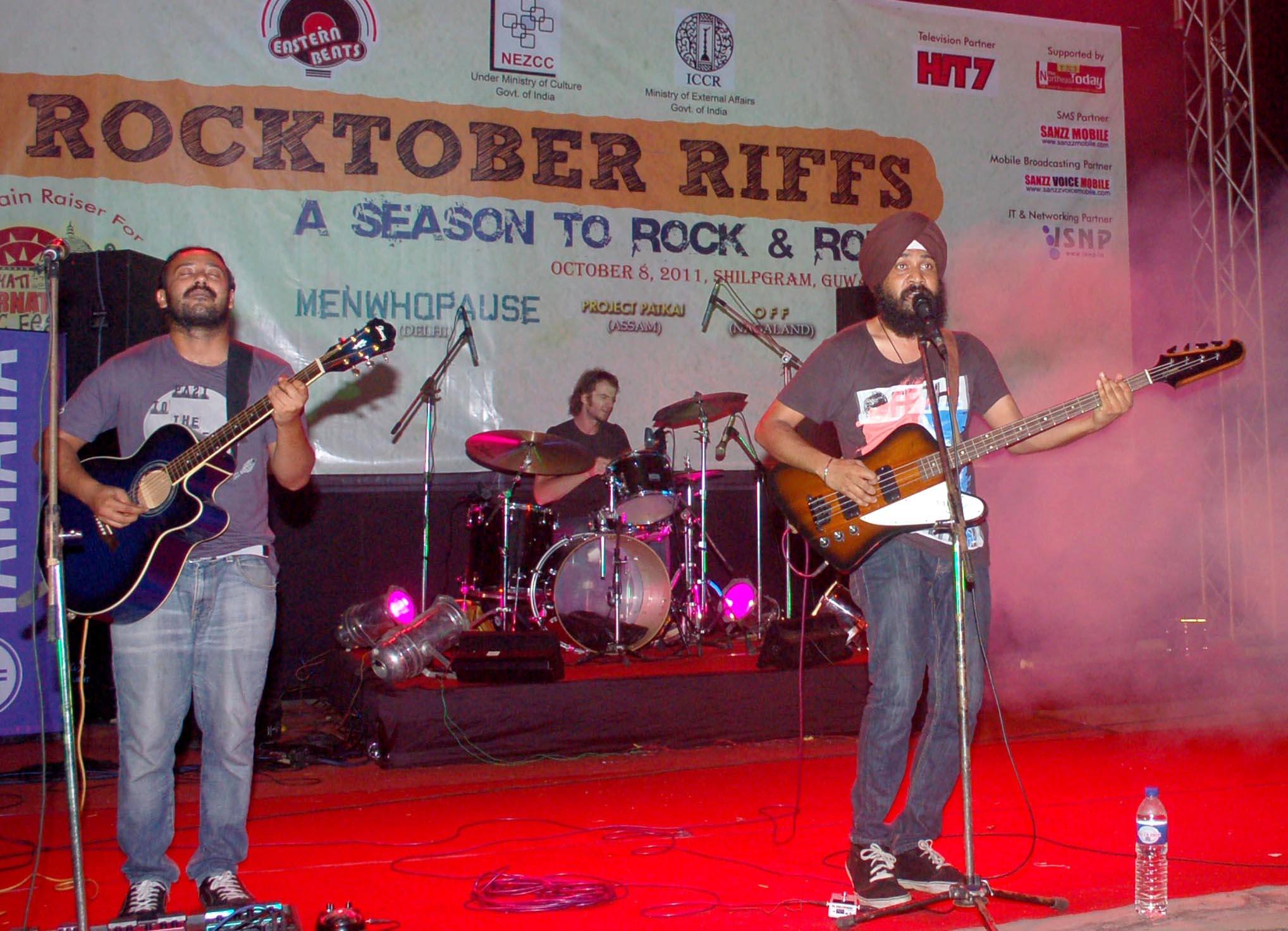 If you thought that with the end of puja the festivities were also over, you better think once again. Indian psychedelic rock sensation Menwhopause carried the puja fever to a different pitch altogether in the ROCKTOBER RIFFS –rock of the ages concert held at Shilpgram last Saturday. The concert marked the formal countdown to the 1st Guwahati International Music Festival.

The event was formally inaugurated by Secretary to the Government of Assam, Cultural Affairs, Youth Welfare and Sports Department Santanu Thakur, IAS. Lauding the efforts of Eastern Beats Music Society towards the promotion and preservation of musical and art forms of the region, he spoke at length about the approaching Guwahati International Music Fest (GIMF). “We are all trying to contribute our might to make this landmark event a huge success,” he said.

GIMF, which will be participated by musicians from UK, Nepal, Indonesia, Bollywood, Goa, Kolkata, Bhopal, folk musicians from different parts of the Northeast, is being organized by EBMS in collaboration with the North East Zone Cultural Centre, Dimapur, under the Ministry of Culture, and with the support of the Indian Council for Cultural Relations (ICCR), under the Ministry of External Affairs, Government of India.

Hundreds of people were seen thronging Shilpgram on Saturday to watch the curtain raiser event. The show began with a performance by Nagaland’s top rock outfit Original Fire Factor (OFF). The four member alternative rock outfit is known for their originals and is incidentally, the first band from Nagaland to win the prestigious Hornbill National Rock Contest 2009. Playing a half-hour set of their originals including tracks like Save Me, the band literally brought the crowd alive and set the mood for December running high.

Guwahati-based classic rock bands PROJECT PATKAI and STAGS also performed a set of popular covers, much to the delight of the crowd present – a mixture of both the older and younger generations.

“Whether it is the alternative-meet-psychedelia sound of Menwhopause, or the protest brand of retro-rock as espoused by OFF, Rocktober Riffs was rock as it is meant to be,” says Eastern Beats Music Society secretary and creative director of 1st Guwahati International Music Festival Aiyushman Dutta.

For those who happen to be still uninitiated, Menwhopause, whose journey started a decade back in 2001, is one of the very few rock success stories in the Indian subcontinent. Labelled as “India’s top rock band” by a jury of veteran and eminent musicians in the Jack Daniel Polls 2008 held at Nashville, USA, the band is presently promoting their third album “Easy”.

Talking about GIMF, Dutta said, “Basically conceived as a confluence of musicians and artists from across the world, GIMF will result in Guwahati witnessing the largest confluence of musicians in the Northeast. The festival has been conceptualised to fill the need for a premier music festival in the country which can showcase the best of regional, national and international talents in the music field to the people of the region. Besides serving as a platform for interaction among musicians, music professionals, music lovers, music trade firms and music institutes, the festival will also help initiate cross-cultural dialogue among people and artistes of the region with those from others parts of the country and the world.”

To be held from December 2 and 3, more than 30 top artistes from all over the globe are scheduled to land in the city for 48 hours of cultural exchange and sharing of ideas through music. “The festival will be spread across three different centres and a number of top-notch artistes from countries like England, Nepal, Indonesia and different parts of our country have already confirmed their participation,” said EBMS joint secretary Peter Alex Todd. Among the visiting artistes, mention can be made of names like veteran harmonica player Brendan Power (UK), rock diva Abhaya and the Steam Injuns from Nepal, Pt Manilal Nag, Joi Barua, Mayukh Hazarika, Sunita Bhuyan, Minoti Khaund, Pawan Bordoloi, musicians from Goa, OFF, Ravi Iyer and the Vayu Project, Cleave, Abiogenes and others.

A core committee, chaired by DN Dutt, has been formed under the aegis of Eastern Beats Music Society to oversee the preparations for the fest. “Besides musical performances, we also have events like music workshops, seminars, lecture-demonstration sessions, film screening camps, etc lined up,” says Dutta.

Voting in progress in Dibrugarh

21 Nov 2013 - 12:16am | Geetartha Pathak
Journalists' Union of Assam (JUA), an affiliate of International Federation of Journalists (IFJ) and Assam State Committee of Association of Small and Medium Newspaper of India (ASMNI) . A premier...

9 Feb 2018 - 10:16am | AT News Dimapur
KOHIMA: All is not well with NDPP where the supremo of the newly floated party in Nagaland suffers serious setback in the run up the assembly polls slated for February 27.  He is none...