Earthquakes and their impact in Northeast India

The recent earthquake with its epicenter in Gangtok, Sikkim has once again raised the question of how safe is Northeast India. The earthquake zoning map of India divides India into 4 seismic zones (Zone 2, 3, 4 and 5). Out of these four zones, Zone 5 expects the highest level of seismicity and is known as the very high damage risk zone . Northeastern India falls in this Zone 5 and hence there is always a chance of more earthquakes here than in other parts of the country.

The effect in Gangtok and other parts of Sikkim has been tremendous. Chunky Dadul while speaking to us from Gangtok enumerated how the whole family had to spend their night in the streets on the day of the earthquakes. The scenes coming in from Sikkim are heart wrenching. One of the heartening sides of the earthquake has been that the rescue and relief operations have been fast but the difficult terrain has made it extremely difficult to approach far off locations notably the villages located in Dzongu. But all kudos to the people of Sikkim for standing up bravely and helping each other.

This earthquake has also rasied questions on how safe is Guwahati considering the number of multi storied buildings that have come up in the last few years. The most important aspect is that the permission is granted to the builder on the plan and specifications that he puts up in paper but once the building has been constructed who validates whether the safety norms are in place, has the building being built on the GMDA guidelines, etc. If you drive around Guwahati these days all you will see is multi storied buildings coming up everywhere including the hills. The question is how safe are these. Can they withstand serious natural calamities? This trend has started in Jorhat as well.

The GMDA seems to have also suddenly woken up to the perils of high seismic zones and they have decided to go for a Technical audit of around 1500 multi storey buildings which were granted permission in the last ten years. They have shortlisted a firm for this work and this is expected to commence shortly. AssamTimes will continue to highlight safety issues in the days to come. We also invite our reader’s valuable opinions on how to make Assam and especially Guwahati city safe.

1 Aug 2016 - 12:47pm | AT Kokrajhar Bureau
Security forces belonging to Police,Army and Cobra battalion of CRPF apprehended a cadre of NDFB(Songbijit faction) from Mainaguri area in Kokrajhar district on Sunday morning. Getting an input... 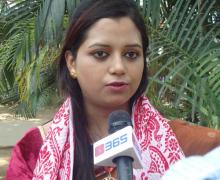 10 May 2011 - 5:02pm | Paresh Baishya
Naazrana Choudhury, a fashion designer from Assam has launched a new brand “URONI” The Theme of Tradition” to promote Assamese handloom...

23 Sep 2012 - 4:22am | editor
Arunachal Pradesh Chief Minister Nabam Tuki has strongly denied sending Koyu with money meant for AICC fund. In a statement, Tuki said that his name was unnecessarily dragged into the controversy....