A mammoth security arrangement is on the cards to make to ensure peace during Durga puja commencing from Thursday.

According to information, top ranked security officials are constantly monitoring the situation in view of possible militant activities during Durga puja.

District administrations across the state are also in constant touch with the puja celebration committees to ensure peaceful celebration of Durga puja.

Our Jorhat Correspondent adds: The police recovered an improvised explosive device Chinamora at 11 in the morning on Sunday.

According to information, the bomb had cells and was a timer device with 18 iron pieces and 200 grams of explosive material.

The bomb was thrown into the compound of the business establishment from outside which was later defused. Police here say the damage would have been extensive.

Top ranked police and civil officials rushed to the spot and started investigations which is going on and no one has so far been rounded up by the police.

MSc in Physics at DBU

11 Aug 2014 - 2:17pm | CM Paul
On 7th anniversary of the start of B.Tech program at Don Bosco College of Engineering and Technology at Azara which launched the Assam Don Bosco University, the Basic Sciences Department of ADBU... 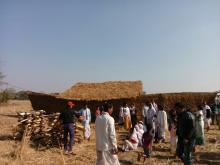 9 Nov 2015 - 11:01pm | AT News Itanagar
Arunachal Pradesh Congress Commiitee has denied the news of 21 of its MLA’s camping in Delhi are hobnobbing with BJP. "This is an absolutely baseless allegation having no iota of truth.  We...