A truck driver was killed and four others have been injured when suspected Karbi Peoples Liberation Tigers rebels opened fire on the borders of Karbi Anglong and Golaghat district on Saturday. The incident took place at around 5-30 in the morning on the National Highway No 37 in Bokakhat. The militants were firing from the Karbi Anglong side on a truck and another vehicle. The truck driver died on the spot, while the four passengers of the other vehicle were injured, two of them seriously.

Eleven other people who were coming from Sivasagar on a Bolero were injured as they tried to flee the firing site in panic. The two seriously injured are senior leaders of Asom Jatiyatabadi Yuba Chatra Parishad. The incident took place when normal life was hit in Karbi Anglong by a 60-hour bandh called by the KPLT.

25 Feb 2009 - 3:58pm | editor
Assam Chief Minister Tarun Gogoi has announced exemption of entertainment tax on the movie in the state a day after India-based Slumdog Millionaire got the Oscars.The Chief Minister said the entire...

26 Dec 2014 - 10:41am | AT News
A massive combing operation is in progress against NDFB-S militants three days after they killed at least 75 people in the simultaneous serial attacks in Sonitpur and Kokrajhar districts. Comprising... 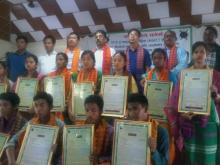