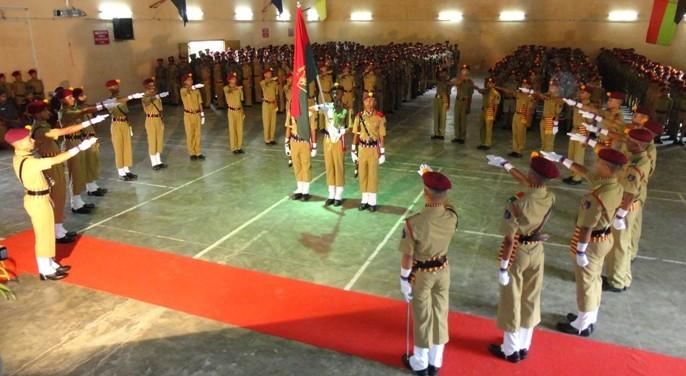 The Investiture Ceremony of Sainik School Goalpara was held on 03 Aug 11 in the morning in school auditorium. Air Marshal Anjan Kumar Gogoi, AVSM, VSM, Air Officer Commanding in Chief South Western Air Command (SWAC), an alumnus of the school graced the occasion as the Chief Guest. He was accompanied by his lady wife Mrs Leena Gogoi.

After investing the cadet appointments Air Marshal Anjan Kumar Gogoi dedicated airframe of a jet fighter, MIG-21 to the cadets of the school. In his short speech during the inauguration of the airframe the Air Marshal appreciated the good show presented by the cadets and motivated them to scale further heights. Also, he wished to maintain his relationship and bond with the school for longer. His presence itself was a great motivating factor for the cadets of the school.

Over a tea break he also interacted with the staff and the cadet appointments. After the refreshment the Air Marshal was taken for a round of the academic building where he interacted with the cadets in various classes. A customary regimental lunch was organised in cadets’ mess in honour of the Air Marshal. It is to be mentioned that Air Marshal Anjan K Gogoi is one of the former students of Sainik School Goalpara. A team of executive members of Old Boys Association of Sainik School Goalpara (OBA SSG) also participated in the programme apart some other parents of the appointments. Later on OBA SSG members also interacted with senior students of the school and motivated them for their careers.

6 Aug 2014 - 8:18pm | Hantigiri Narzary
An identification camp for persons with disability was organized in association with National Institute for the Orthopedically Handicapped (NIOH), Kolkata at NTPC Bongaigaon Hospital,...

19 Feb 2016 - 2:15pm | AT News
Patriotic People’s Front Assam (PPFA) has hailed the initiative to raise the national flag in Jawaharlal Nehru University premises prominently as it would help erasing the unwanted impression about...

21 Apr 2015 - 7:53am | AT News
An Assam Congress delegation met Sonia Gandhi in New Delhi on Monday amid speculation that a dozen of sitting MLAs are preparing to join BJP. Led by APCC president Anjan Dutta, the team apprised...