Troops of 315 Field Regiment (Kargil) of the Red Horns Division apprehended one notorious NDFB (AT) Cadre in Miripara village (Ambagaon), under Udalguri Police Station on July 22. According to army press release the arrest was made on the basis of information from ground sources after a massive operation was launched by the Army Camp Borrengajuli to apprehend Rahul Khaklari from village Miripara. A pistol with live ammunition was recovered from him. Further questioning of the cadre revealed his close links with Dwikhang alias Dinen Diamari, B Sudhup alias Gendra, Simangsa Daimari and B Saitho. The apprehension of the notorious cadre has rendered a major setback to NDFB (AT) and provided a great relief to the local populace and, the business community.

23 Apr 2014 - 10:42am | AT News
Barpeta is gearing up for a free and fair Lok Sabha polls in the third and final phase slated for Thursday.Voting in this crucial constituency is taking place at over 1900 booths from 7 in the... 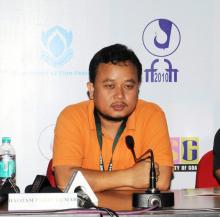