Whatever had been the distribution of the portfolio in the hatric Congress government, the fact that Dr. Himanta Bishwa Sharma, was given the education including health portfolio, was enough for the general people to be happy, first to see some more progress in the health department and expecting the same in the Education department which is considered being one of the worst department in the state. After the new portfolio as education minister, perhaps the education department officials had made their minds to face the music of the minister but were little casual too. Thus the minister’s sudden visit to the DPI office at Kahilipara had come as a big surprise to the ever casual and lazy workers there. Whatever may be the following outcome in the near future, the curtain raiser was enough for the department to take the message of the minister seriously and show some professional attitude towards their work. Things are not expected to change overnight, yet a sight of relief and hope.

Next came the convening of a meeting of principals of those schools that has Zero Percent results. A step perhaps not many could have ever thought in their minds. The results of these schools were long, some 160 schools from all over Assam figured in the list of zero percent success, some consecutively three years some two. The meeting was on 23rd June, Saturday and following the Assam Bandh Called by the Krisak Mukti Sangram Samity in protest of Akhil Gogoi, s arrest, around 60 school heads could come to the meeting. It was not an easy ambience for the teachers to face the music of the new education minister; however they were lucky to escape with warning. So from next time the teachers have to show positive results or their SEBA recogonsation gets cancelled. The teachers had funny answers to the questions put by the minister while asking them to show their difficulties. Himanta Bishwa Sharma did cracked jokes while sending a strong message to the particular teacher community and perhaps the teachers could also gauge the intensity of the new education minister, for most of them it was their first bad experience in their life. But back home they might have thanked God for nothing had gone wrong except a good warning to change their attitude towards education.

Coming back to the health department, the health minister at a press conference today said that irregular and irresponsible doctors will be shown the door while the good will be rewarded. The minister has divided the doctors of various health institutions in the districts in five categories, Viz. first; Doctors staying in HQ and regularly attending duty, second; Doctors who do not stay in HQ but regularly attending duty, third; Doctors who do not stay in HQ and reports late for duty, fourth; Doctors who occasionally comes to duty and fifth; Doctors who do attend duty at all. The doctors of the fourth and fifth category will be advised for VRS and CRS and to fill the gap their will be new recruitment. An average attendance will be calculated from the last two years and thereafter things will be decided. On this regards the DC, s have already been instructed and official letters have been dispatched. This is perhaps a step not may Doctors would welcome, but every patient and public will welcome.

Not the least the new education minister has also taken note of government teachers taking into active politics and journalism profession. So another concern to clear the ground for building a good education environment in the state. Things have been brought into the notice, letters to be sent to the president of Political parties and Editors to consider the situation and for creating a better education environment. Time will say how things will work in the near future. But the minister is trying to break some jinx that has been long associated with the system and thus hampering the public by and large. Hope these new steps would be for the betterment of the people than benefiting any political party or a person. After all some one has shown the right way as what a minister can really do if he wishes to do. Hope others will follow in the right spirit and not just to imitate someone. With high expectations that the minister will keep his words.

17 Jun 2017 - 7:15pm | AT News
Rainwaters in Guwahati have been receding where some low lying areas would take a few days more to be cleared of the stagnant waters. But the Guwahati denizens are yet to get out of the blues where a... 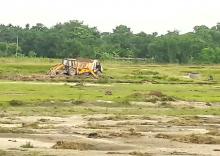 20 Jul 2017 - 7:19pm | AT Staff Reporter
In view of the rainy situation and with unwanted excavation at river Nonai at village Pachim Nalbari, under Harisinga Revenue Circle,severe erosion has caused a threat to the change of course of the...

20 Mar 2014 - 4:38pm | AT News
Tezpur BJP candidate Ram Prasad Sarma filed his nomination papers on Thursday.Accompanied by a hundreds of his supporters at a huge procession, Sarma arrived in the DC office in Tezpur where he filed...