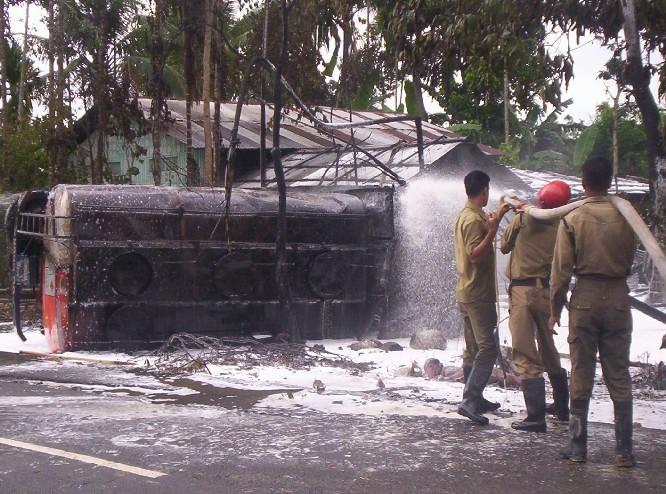 Atleast 5 people died and over 35 others have been injured at a huge inferno which took place after an oil tanker met mishap on the National Highway 37 in Golaghat. The tragic incident took place at Bongaon in Badulipara on Tuesday wee hour where a huge inferno erupted when over 30 people gathered to collect crude immediately after the mishap of the oil tanker. Some of these people manage to flee immediately after an explosion which was followed by the huge inferno. Fire tenders from NRL are being deployed but the situation is yet to be brought under control.

Update: Tragedy struck NH37 in the wee hours of morning on 31st may, when an oil tanker, bearing registration no. AS-01/K-6257, from Tinsukia bound for Imphal crashed against an electric post at Bongaon under Komargaon Police Station in Golaghat Dist. As a consequence a high tension electric cable struck the OIL tanker. Sometimes later a group of local people gathered on the spot and started collecting the oil pouring out of the tanker paying a deaf ear to the repeated warnings of the police present at the spot. When electricity was resumed sometimes later, it set ablazed the tanker and the inferno engulfed the surrounding areas within a flicker leading to the loss of five human lives as well as three nearby situated hutments. The bodies were charred beyond recognition. Four victims have been identified so far, they were Mintu Barua (22), Paban Bora (42), Kunu Bhuyan (48), Rajib Bora (35) and one body is still unidentified. Nearly twenty peoples were also injured in the incident, they were rushed to Golaghat Civil Hospital, Assam Medical College, Dibrugarh and Jorhat Medical College. Among the injured the conditions of Prodip Charingia, Dulu Charingia and Moinul Haque are very critical.

The fire brigades from Bokakhat, Golaghat, Numaligarh Refinery Ltd and Dergaon took prompt action to bring the fire under control. The Bokakhat Fire Station played a laudable roll and was the first to respond to the emergency. It is worth mentioning that the Bongaon area had also earlier witnessed a number of such mishaps. But in today’s tragedy, it was the greed of the people for oil that drove them to the jaws of death. 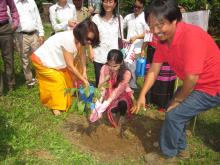