Demanding immediate release of all the jailed leaders of Dima Halam Daogah (Joel), the DHD(J) has called for 48 hours Dima Hasao Bnadh from 5 am of 23rd to 5 am of 25th next, disclosed Bele Dimasa, Publicity secretary, DHD(J) in a press meet held at it Liaison Office at Sarkari Bagan, Haflong today(Sunday).

Dimasa said if the government does not pay heed to their demands then they would be compelled to call such bandhs for the release of their leaders in future also.

It is to be mentioned here that the DHD(J) had surrender their arms on October 2nd 2009 before the Chief Minister, Sri Tarun Gogoi who had assured to solve their problems within 100 days.

Talking to the newsmen Dimasa also expressed concern over the indifferent attitude of the government saying that government is not giving proper importance to their grievances which may lead to frustration among the cadres.

4 Apr 2012 - 4:46am | editor
Chief Minister Tarun Gogoi Gogoi asked his ministers and officials to prepare district-level plans to deal with the draught-like situation in the state. The instruction came up when Gogoi held a... 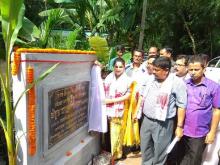 14 Sep 2013 - 11:24pm | Dr M Firoz Ahmed
Aaranyak, a premier biodiversity conservation organization, along with Wildlife Protection Society of India and Wildlife Society of Odisha has submitted a joint memorandum to the Government of India...