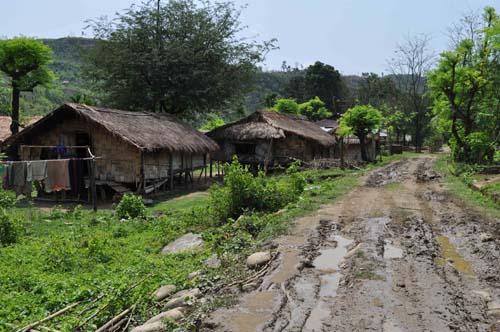 Even after 64 years of Independence, the Jinamghat village located in Jinam Valley constituency of Dima Hasao Autonomous Council is yet to see the light of development.

The village established long back in 1921 is lagging behind due to indifferent attitude of the representatives of the Government as well the developmental agency, the people alleged.

Though the place is situated on the bank of Jinam river and only 130 KM from Haflong, the district HQ of Dima Hasao District but it takes not less than 10 to 15 hours by road and the only means of communication is surface road which is not in good condition. Electricity is a rare thing here.

The people of Jinamghat suffer a lot for the bad communication and the worst sufferers are the students. There was a cooperative society in long past which used to provide essential commodities to the people of Jinamghat. But for a long time the cooperative is closed for the reasons best known to the authority concerned. People also alleged that they were not provided with job card and BPL cards. In fact, the people of Jinamghat are considered to be the most neglected people of the district, they lamented. It was really a painful matter for any visitor to see a patient in a dying bed for the want of proper medical care in the area. The prime source of income of these people is horticulture but due to absence of communication they do not get proper price of their products.

They appealed to the concerned authority and the council authority to address their grievances at the earliest.

Permalink Submitted by matu faihriem on Fri, 10/06/2011 - 23:03
Kudos to Anup Sir.You really have a heart for the downtrodden.In reality,what you have written is just a tip of an iceberg!The scenerio beyond Jinamghat is much worse.But,the fact is who cares for the downtrodden !!!When you have a heart for them,the developmental road map is perhaps there already in your mind.If there is no one to heed their cry, I will be there to help you out although I am simply a school going girl.There is nothing impossible.Carry on Sir.

Permalink Submitted by anup on Sun, 12/06/2011 - 21:39
Lot of thanks for the comment dear Matu, I will very happy if you can write to me. I honestly admit that my writing on Jinamghat was tip of an iceberg.