An RTI activist has revealed misuse of OBC certificates by sons and daughters of some high-ranking Government officials just to sneak into the state Home Department. Laishram Sanatombi of Yairipok Bishnunaha, Imphal East sought certain information through RTI from the state Home Deparment and the Imphal West Deputy Commissioner on the DPC held last year for recruitment of 72 women SI’s. While seeking information Sanatombi was able to discover about this. This was informed by RTI activist W Joykumar during a press conference held at Imphal on Monday. He also said that he appeared in the DPC with a high hope of becoming an SI.

26 Jan 2009 - 4:15am | Nava Thakuria
If it becomes a ritual for the separatist groups of Northeast India to impose diktats on the Republic and Independence Day of the country, it seems to emerge as a self regulated responsibility for... 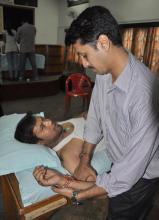