With a view to create mass awareness on Legal Aid provided for the common people by Gram Vikas Parishad in association with Lioness Club of Nagaon Greater organized a awareness camp on March 26 at its Head Office situated at Rangaloo. Deepa Saikia senior advocate and Project Chairman of Legal aid Cell, Advocate Shehnaj Sultana Ahmed, Advocate Rupali Goswmi Ahmed 1st and 2nd vice President respectively of Lioness Club, Nagaon Greater and secretary Kusum Devi were present in the open session. Reknowned and senior social worker Aliza Ahmed was also one of the invited chief guests present in this occasion. Sirajuddin Ahmed General secretary of Gram Vikas Parishad highlighted the objectives of the awareness camp. Saikia made a brief and valuable speech about Indian Judicial System and Indian Panel Court (IPC) Acts and how the general people can avail them. Other chief speakers including advocate Shehnaz Sultana Ahmed and Rupali Goswami spoke about IPC Acts against domestic violence against women and free legal aids available for the general people. Kusum Devi, Secratery of Lioness Club of Nagaon grater thanked Sirajuddin Ahmed for organizing the awareness camp at Rangaloo and assured their help in future ventures.

11 Oct 2014 - 10:43pm | AT News
Congress party is confident of coming back to power in BTAD. Only the time is required. The ruling party in Dispur thinks so. The party will have to wait for 2015 elections in the BTC.This was what... 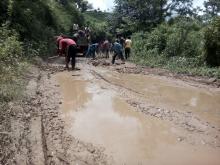