Electioneering in Dima Hasao getting momentum

In order to ensure smooth and proper management and free fair, peaceful conduct of Assembly election from 16-Haflong (ST) Legislative Assembly Constituency is in full swing. Already detailed plan of action has been chalked out for performance of various duties to be carried out by the election machinery prior to, during and after the poll.16 (sixteen) different cells and sub-cells have already started functioning to ensure free and fair election process and prompt disposable of the works related to conduct of the poll scheduled to be held on April 4th next.

D. Borthakur. IAS, Deputy Commissioner & Returning Officer 16-Haflong (ST) Legislative Assembly Constituency and R.K Laskar. ACS, Election Officer, has held several meetings with all Government Officials and political parties to strictly follow the model code of conduct. He also directed the Zonal Magistrates and sector officers to ensure proper and strict observance of the code of conduct. In a meeting with the political parties and press media the Deputy Commissioner requested all of them to adhere to certain guidelines as issued by the Election Commission of India. He also requested everyone to give full cooperation to the District Administration for a free and fair election.

4 May 2016 - 7:06am | AT Kokrajhar Bureau
At least nine women were apprehended by female constable of SSB of 16th battalion(Bn) for involved  in the smuggling who were trying to evade the international border,besides seized illicit...

5 Sep 2014 - 8:46pm | Hantigiri Narzary
Family members of arrested television journalist Jaiklong Brahma alleged that police has not yet made medical care available to him. His wife Citra Brahma claimed that her husband suffers from high... 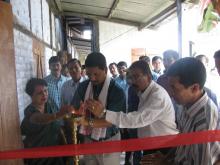 2 May 2012 - 8:00pm | Jayanta Kumar Das
Udalguri district administration and office of the Inspector of Schools,Udalguri have organised a three day long Grantha Surabhi and Bijnan Jeuti ( book fair and science exhibition) under the...