To be presided over by prime minister Narendra Modi, the meeting is expected to chalk out steps to detect and deport the immigrants from the country to fulfil the party’s principal poll promise.

Sources told Assam Times that the NDA government in its June 2 cabnet meeting will discuss a huge exercise across the country to identify all illegal Bangladeshi immigrants settled in after 1971 where Assam’s demography has been disturbed.

Steps to update the National Register of Citizens 1951, in Assam will also figure in the cabinet meeting to be attended by Sarbananda Sonowal.

13 Dec 2020 - 11:05am | AT Kokrajhar Bureau
Kokrajhar: BPF chief Hagrama Mohilary has urged BJP leadership to help his party retain BTC hours after his party fell short of numbers. Mohilary told newsmen that they are still with BJP-led... 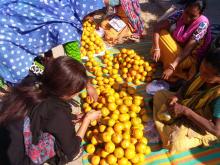 7 Dec 2018 - 12:11pm | AT Kokrajhar Bureau
Kokrajhar: Present day season is regarded as day of Orange fruit’s production which are finding in all market or bazaar across the state. The Orange fruit, produced in neighboring Bhutan country is...

1 Jul 2012 - 2:07am | editor
Prime Minister Dr. Manmohan Singh and UPA Chairperson Sonia Gandhi are scheduled to visit the state on Monday to take a stock of the situation.According to information, the duo would make an aerial...