The main opposition AGP is in a mood to strike prepoll deal with ASDC and B PPF to fare well in the assembly polls slated on April 4 and 11 AGP will leave a few seats for A SDC in Karbi Anglong district while the main opposition party is set to leave a good number of seats for BPPF in the Bodo dominated districts. 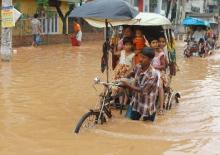 7 Oct 2015 - 9:49pm | AT News
Manoranjana Sinh’s arrest in the chit fund scam seems to have created no less flutter in both Congress and BJP. CBI is believed to have been closely examining the role of BJP leaders Dr Himanta Biswa...

25 Apr 2017 - 3:36pm | AT News
Chief minister Sarbanabda Sonowal on Tuesday assured a delegation of six ethnic groups of sympathetic consideration of their demand for ST status a day after they openly raised doubt over the...