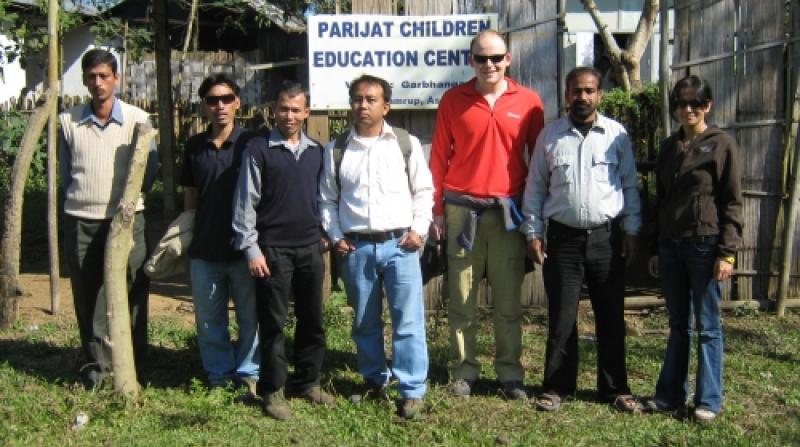 I believe everyone in their lives at one point or another think about how they can do some social work or contribute money to some cause so that they can generate good karma and sleep a little easier at night. Dan and I have thought about doing some social volunteering for some time now but unfortunately other commitments such as work, exercising, meeting friends and in general life, kept intruding on our aspirations. We pacified our conscience with very occasional volunteering and donations to various welfare societies but the desire to do something more substantial never abated. Finally, rather than continue our slacktivist behaviour, we decided to finally take the plunge, quit our jobs and took off for my native India to start our volunteering experience.

We decided to look for volunteering experiences in Assam specifically as I am Assamese and while I was not raised here, we thought it would be nice to give something back to the community from which my family originate. Assam has steadily lagged behind as India continues its fast-paced economic growth and there is significant need for support in social and economic development. Education is a key area of concern. The number of out of school children in Assam is 3.39 lakh.36% teachers at primary level and 10% at Upper Primary level are untrained . Women in Assam can also expect to live only 5.2 years less than their counterparts in the rest of the country . Rural literacy rates are 25 per cent lower than the urban rates and in the case of women, the urban-rural divide is as high as 30 per cent.

Thanks to the magic of Google, we discovered Parijat through the Omprakash website, an organisation which links volunteers to needy organisations. We began our volunteering at Parijat Academy one month ago and it has been an incredibly inspirational experience for us. Parijat Academy was started by a man called Uttam Teron in 2003 as a one classroom, four student school. Seven years later, Parijat Academy offers free education to 502 children from nine impoverished tribal villages. In a community where parents are woodcutters, sell rice beer, are domestic labourers, work in the stone quarries, or shifting cultivators, Parijat Academy offers the children in these communities opportunities for a better quality of life than would have been available to them previously. Parijat Academy specifically tries to reach out to drop-outs and encourage them to return to school. The communities are slowly being educated as to the importance of education and parents are now continuously approaching Parijat Academy to take on their children. Parijat Academy’s ultimate goal is for community development and it hopes to eventually achieve this through vocational education, adult literacy classes, a healthcare centre and a Disability centre.

Dan and I visited three tribal villages in the Garbhanga area, near the Assam Megahlaya border to view the outreach centres there. The journey was a bit bumpy to say the least as we travelled along an almost non-existent rocky and precarious road to what seemed to be a completely isolated community. Garbhanga (ironically within Guwahati’s ‘metro’) is 17kms away from the closet village, Lochra, and yet it took us 1.5 hours to get there due to the road conditions. If it rains, it would be safe to say that there would be no access to Garbhanga at all unless you are going by foot. The only concrete building in the whole area seemed to be the government school which teaches Classes I-IV, and the only high school available is 17kms away in Lochra. It didn’t seem likely that the rest of the dilapidated bamboo shacks which passed for houses would stand up to a strong gust of wind. Most of the parents here appear to be shifting cultivators or woodcutters and there appears to be a high degree of alcoholism in the area. The children here have no chance at all other than to follow the same path as their parents. It was heartening to meet the sole teacher at one of the education outreach centres teaching classes V- VII. The classrooms facilities were negligible to say the least: a few bamboo walls with most of the classroom being exposed to the outer elements; a few benches and tables and almost no books or writing materials at all. Despite these deplorable conditions, the commitment of the teacher as well as his students to achieve some semblance of an education was truly touching. As Uttam says ‘Something is better than nothing’ and we couldn’t agree more. Despite their impoverished circumstances, the parents here want better for their children and approached Parijat Academy to do something for their children. Uttam has taken 21 children from Garbhanga as students at Parijat Academy, where they are currently housed in very modest hostel facilities. These students are sponsored by various people around the world, costing roughly INR 2,000 a year for each student. These children are all from the Karbi community and spoke almost no Assamese at all before starting at Parijat Academy but now all are fluent in both Assamese and English and can read and write. It is a small step towards the progress this community greatly needs. Uttam hopes to increase the number of children in the hostel to 100, but this will be impossible without further funding.

Dan and I have been working at Parijat for the last month helping Uttam with building the Strategic Plan for the next 5 years. Dan and I both have finance and consulting type backgrounds and our skills were better utilised in this particular activity than simply teaching English. Parijat Academy has a great vision but limited funds, and needs to start to partnering with organisational CSR initiatives/charitable foundation grants. Thus far, it has been reliant on intermittent individual and small charity organisation donations but cannot continue in this vein if it wants to expand its current operations and achieve its long term vision. Parijat Academy has become a passion for Dan and myself and we hope to be involved on a lifelong basis and help Uttam to achieve his vision. As India develops, those who prosper from the economic miracle should not forget those left behind. Children should not be punished due to a circumstance of birth and every child should have the same opportunities available to them!