Training on Nutritional care of family

Er. Benjamin Kaman from Krishi Vigyan Kendra also attended the programme, who conveyed the trainees about KVK and stressed on adoption of new technologies to farmers. He had an interactive session with the members of three women SHGs and guided them the ways for proper functioning of SHGs.

Shoot out in APBn camp in Lakhimpur; 2 jawans killed

22 Nov 2008 - 3:26pm | editor
A 13th Assam Police Battalion jawan shot dead his colleague before killing himself at Lilabari camp in Lakhimpur distict on Thursday midnight. The reason has yet to be ascertained.The incident took... 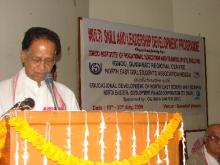