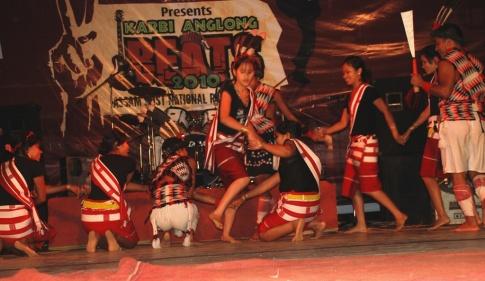 Curtains came down on the 8th Rongtheang festival last Thursday amidst a glittering display of tradition and modernity, even as thousands of people thronged into Karbi Anglong to take part in this unique event dedicated towards peace and development of youth of that area. Naga rock band Dementia was declared the winners of the 2nd Karbi Anglong Beats Contest that saw ten top bands from all across the country taking part.

Eastern Beats Music Society secretary and creative director of Rongtheang festival Aiyushman Dutta said, “Playing in front of a highly enthusiastic full-capacity crowd of 10,000 people, Dementia, with their sheer musical prowess and on-stage presence, proved the better of the other nine competitors. While the lead guitarist of Dementia also walked away with the electric guitar sponsored by Furtados, Cleave, a heavy metal outfit from Manipur, was declared the first runners-up.”

A rock band from Manipur performing

The 8th Rongtheang festival and the 2nd Karbi Anglong Beats Contest was organized with the support of the ICCR, Ministry of External Affairs, Government of India, Numaligarh Refinery Limited, State Bank of India, Mc Dowells No.1 soda, Furtados, Rolling Stone magazine, Sound Box magazine, The Northeast Today, amongst others.

Thousands of people had entered Serhong Kup – the venue for the Rock concert – and lapped up all the music that was in store for them, proving that Diphu and its adjoining areas has the best crowd of rock lovers. As Purab, vocalist of Filharmonix, said, “I have never played in front of such a fantastic crowd. We played an entire set of originals and yet their participation was mindblowing. The audience response makes up for our sadness at having lost the contest!”

Aiyushman Dutta said, “The 2nd Karbi Anglong National Beats contest was dedicated entirely for development of youth in Karbi Anglong. The fact that all the political parties, administration and separatist outfits supported us in this endeavour should be a case in point. I would like to offer my heartfelt thanks to the people of Rongtheang and Karbi Anglong for all their support.”

The Rongtheang fest is a mega ethnic carnival that witnesses the participation of more than 12 different tribes and communities. Held over a three-day period in Rongtheang village, this festival acts as a perfect platform for building the spirit of brotherhood and bonhomie. Dutta said, “At a time when gaps in the social fabric of Assam are becoming more and more evident with each passing day, Rongtheang fest can be the perfect village festival for villages and towns in other parts of the State to emulate.” Some of the major tribes and communities in Rongtheang are the Karbis, Dimasas, Rongmei Nagas, Biates, Hmars, Mizos, Vaipheis, Bodos, caste Hindu Assamese, amogst others.

Various competitions like blind-hit competition, stilt walking competition, couple show, salad making competition, fashion competitions, etc, besides traditional cultural competitions were held across all three days. While the final inter-cultural dance display of all the different tribes and communities of the village provided a spectacular sight, the other big draws for visitors in the festival were the extremely well-choreographed fashion show on the final day and the food complex which had a lot of traditional food items up for sale. 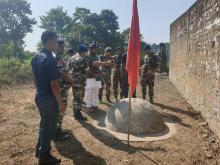 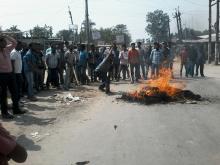 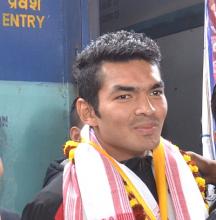