A hardcore NDFB cadre was killed at an encounter with security forces in Sonitpur district on Sarturday evening. The encounter took place at around 7 in the evening at Bhorajuli area under Bihali police station along Assam Arunachal Pradesh border. The encounter is still going on. Notably, 2 ULFA militants were killed in an encounter with security forces in Kokrajhar district in the wee hours on Saturday. Acting on a tip-off, a joint team of army and police launched a massive operation at Patoliguri area near Gosaigaon along the Assam-Bengal border, where a group of militants opened fire on the security forces and bullets were exchanged.

18 Sep 2014 - 5:49pm | AT News
A specific mechanism has to be there to ensure sustainable development keeping in mind the rural economy, said Dr Abani Bhagawati.Participating in the round table conference in Guwahati on Thursday,...

28 Jun 2010 - 5:18pm | editor
A number of victim families, who suffered irreparable losses due to mindless violence propagated by the banned United Liberation Front of Asom in the last three decades, will talk to the media on... 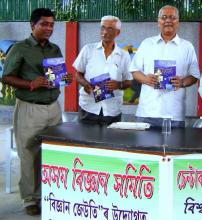