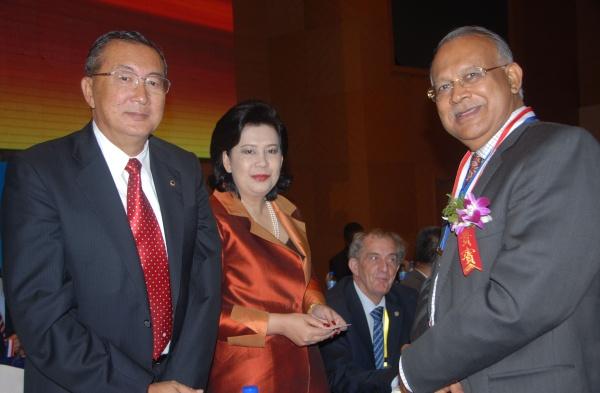 Indo-Chinese relations received a shot in the arm when the 2010 World Congress of the Chinese Elite held at Xian on October 9 presented a special award to an Indian for “International Friendship and Emissary”. The Overseas Chinese elite 2010, which was participated by a formidable and influential 600 member-strong Chinese community diaspora from different parts of the world, saw the award being presented to Indian Chamber of Commerce chairperson Mahesh Saharia, who is also the Founder Chairman of the Center for Promotion of India China Cooperation.

The presentation of the award has brought good cheers to the people of Assam. This is more so because Mahesh Saharia, who is a member of the well-known Saharia family of Dibrugarh district in Assam, has become the only Indian to have been presented with an award for Indi-Chinese co-operation and peaceful relations, that too in an event meant specifically for overseas Chinese.

China has already become the second largest economy after the United states replacing Japan this year and China has become the largest trading partner of India, the estimated total turnover estimated at 60 bln US $. But many feel that India and China have to now think beyond just trade.

In an e-mail note to this reporter, Centre for Promotion of India- China Cooperation Asst Secretary Sarah Han Panjuan said that economic and financial cooperation between India and China has to now look beyond just promoting trade and investment. “It could cover much broader areas, like strengthening cooperation and information exchange between Government agencies and related institutions; promoting technology and industrial cooperation in fields such as agriculture and rural development, IT Sector, education and Health, project contracting, exchanging experiences in the management of economy, such as city management, poverty relief and social security, disaster management, water resource management, etc”.

Meanwhile, receiving the award Saharia stressed the major roles of both China and India in the global order in the coming years and the need for both countries to improve mutual relations. “Close cooperation between the two countries hold the future of mankind – be it in the matter of food security or world climate change,” he said. Describing the present trade of 60 billion between both countries as only a tip in the iceberg, he said that both sides have a long way to go in realising their potentials.

The chairperson of the Indian Chamber of Commerce further said, “China and South Asia compromise more than two-fifths of mankind in terms of population but yet contribute less than 10 per cent of world trade, not to speak of Intra regional trade which is less than 5 per cent. As China and South Asia increase their legitimate share in the world trade and as there is more awareness amongst Indian and Chinese enterprises of each others capabilities, the volume and value of intra regional trade is bound to increase many folds.”

Permalink Submitted by A Northeasterner on Mon, 11/10/2010 - 18:24
CONGRATULATIONS! CONGRATULATIONS! This achievement by an Assamese and a North-easterner is greater than a prize in a Hindi TV channel singing or dancing competition.

30 Aug 2012 - 3:02am | editor
Social activist Akhil Gogoi on Wednesday said that the Bodoland Accord must be revisited to ensure land rights to indigenous people in BTAD areas. Talking to reporters in Guwhati, he said that the...