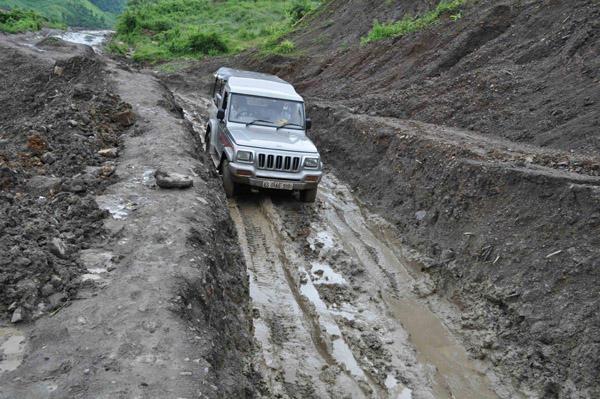 When the entire state is eyed at the District of Dima Hasao for the much publicized multi-crore scam, the people of district are forced to suffer a lot as the development has come to grinding halt.

The Haflong- Silchar road which is considered to be the prime means of communication between Barak Valley and Brahmaputra valley is in dilapidated condition for alleged wanton earth cutting in the name of BG construction. The people traveling by the road are compelled to take risk of their lives. Though the distance from Haflong to Silchar is only 111 KM but it takes ten to twelve hours to reach Silchar.

A stretch from Retzoul to Harangajao, which was re-aligned for the BG construction, is in more precarious condition. Traveling by this road has become dangerous journey for the people. The road condition has also cast an impact on the prices of essentials. The cost of essentials at Haflong is skyrocketing on the plea of bad road condition.

People termed N. C. Hills as the ‘no communication hills’ while holding the government of Assam and the district administration of Dima Hasao sole responsible for their sufferings. They questioned why the Deputy Commissioner of Dima Hasao district who did not take any steps for the development of this district

Permalink Submitted by Parthasarathi Konwar on Sat, 14/08/2010 - 04:35
This scene is not about the so called 'step-motherly' attitude which is a favourite excuse for some people. This scene reflects CORRUPTION, CORRUPTION and CORRUPTION. When Mohet Hojai was caught with Rupees 1 crore in his car itself, the govt and autonomous council members should have started an enquiry. It took a feature story in "The Week" to shake up the administration to a scam worth 1000 crores and even more.

Permalink Submitted by Unknown on Mon, 16/08/2010 - 20:04
NHAI had awarded the project of four laning from Silcher to Lamding, about 4 years ago, near about in the year 2006. All the companies, except M/s HCC Ltd, had taken the money of mobilization and equipment advance and gone off. They had not completed even 5% of the project. NHAI must black list those contractors those had left the projects. Ultimately the people of NC Hill is the sufferer. Who is going to pay the compensation? What the BG constructions is doing since last 10 years? Had they constructed the line between at least any two stations? Who is responsible? Weather, NHAI, Militants or Administration of that area? The progress of the project is least bothered by Govt. of India. I don’t know who is to be blamed. But I am sure that some leaders doesn’t want to construct the communication between Silcher and Lumding. The only reason is the transport business from Silcher to Guwahati and the leadership of Guwahati will be in back seat.

Permalink Submitted by Abhishek on Fri, 20/08/2010 - 03:21
Its only corruption that is solely responsible for the mess. If these projects r completed then on what election plant would the netas of Barak valley and Dima Hasao contest elections. The authorities should realize that this is the lifeline of not just part of Assam but also of Mizoram, Tripura and manipur.

22 May 2017 - 8:26am | Shajid Khan
The Udalguri chapter of Lions Club is going to hold a  free eye check up at Green Sight Valley, Amgashi, Garobasti near Indo-Bhutan border in Udalguri district on May 27 next. This was informed...