Another string of edeadly violence was averted in Guwahati when security forces recovered ten hand grenades at a railway station on Thursday. The hand grenades were kept inside a bag which was put at the Paltanbazar Railway Station premises at around 5 in the afternoon. Constable Satish Barman reported it to the authorities. Police suspect it an abortive attempt by ULFA and NDFB.

Permalink Submitted by Rongmon Pegu on Sat, 07/08/2010 - 19:59
A LOOK AT GROUND REALITY---- The All Assam Bodo Students Union (ABSU) President Prabin Boro has launched the sending of 4 lakh letters to the prime minster of India for a Bodoland in north bank of Brahmaputra which will spread from Sonkosh to Sadiya. I would like to ask Mr. Boro what about the Mising, Deuri, Tai-Phake and other native communities of the north bank. If Bodoland is their birthright, what about ours? ABSU talks about Article 2,3 and 4 of the Indian Constitution for creating Bodoland. When 784 dams will be built all over Arunachal Pradesh, no article, be it 2, 3 or 1000, will be able to save the north bank of the Brahmaputra. Why doesn't the Bodo student leaders speak out agianst the release of water from the Kusheri in Bhutan which floods lower Assam? The ABSU can definitely send 10 lakh letters to thje government of Bhutan, that of Arunachal Pradesh and PM of India to stop dam activities. What is the use of any kind of ethnic land when all our proposed 'lands' are going to be gulped down by man-made flash-floods released from dams. 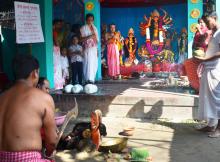 21 Apr 2009 - 1:16pm | editor
Assam Election Watch (AEW), an organization monitoring the 2009 election candidates, has come out with the analysis of contesting candidates during phase I and II of the elections. AEW looked at...