Noted critic and prominent citizen Dr Hiren Gohain has sent a letter to chief minister Tarun Gogoi on the progress in terms of holding talks with Ulfa. According to reliable sources, Dr Gohain,who recently led a delegation of Sanmilita Jatiya Abhibartan to Delhi, in his letter to Gogoi on June 28 has asked the chief minister to let him know the progress made so far to hold talk with Ulfa. It may be noted that the government is clearing the decks to appoint former intelligent bureau chief PC Halder as its interlocutor in the process. Halder called on Dr Gohain when the latter was visiting Delhi to meet PM,Chidambaram along with several other top political leaders. 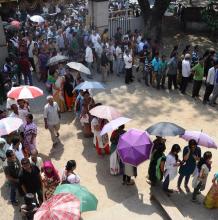 Stop proposed bill to do away with Customary Laws