Joint intiative of NACO and Rajib Gandhi Foundation are really commendable coming out with such a on rail HIV/AIDS awareness drive through a train. People of Kamrup district should come across here and gather their inquisitives about the deadly HIV/AIDS from the infrastructure brought by Red Ribbon Express-said APCC President and Rasya Sabha MP Bhubaneswar Kalita while inaugurating the Red Ribbon Express on June 21 last, an on rail train for creating awareness about HIV/AIDS amongst the people of Kamrup (rural) and its adjoining areas has arrived the locality. The Red Ribbon Express was formally inaugurated by APCC President and Rajya Sabha MP Bhubaneswar Kalita this morning here at Rangiya railway military yard premises in presence of senior railway, govt officials, students and local people. MP Kalita recalled the goodwill gesture of NACO and Rajib Gandhi Foundation and pointed the significant features of the train for creating aawreness about deadly scourge of mankind the HIV/ AIDS. “ Proper preventive measures, right education to awareness among the people can only minimize the cases of HIV /AIDS among the populace”- he said urging people’s participation irrespective of genders in the Red Ribbon move . Joint Director of Assam State AIDS Control Society (ASACS) Rakhi Chakravarty in her speech said abou the facilities being brought up by the train for the people with all the infrastructures to educate the people about HIV/AIDS . It has exhibition, provision of counselingabout the disease she said urging the people’s without any hesitation and gather their information about the causes, prevention about HIV”-. Kamrup DC SK Roy, Rangiya railway division DRM SKumar, deputy director of ASACS MBHasong, Kamrup ADC BBDeb Choudhury, beside other govt officals were present. Later, skits on AIDS/HIV by cultural troupes were displayed. 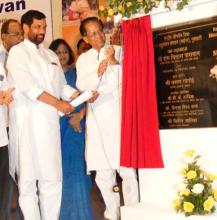 3 Jun 2017 - 12:32pm | Shajid Khan
The dilapidated state of roads of Tangla town has been posing great inconvenience to people, mostly school and college goers, commuters and traders of the town along with people of nearby places. The...

20 Aug 2014 - 9:18pm | AT News
Union home minister Rajnath Singh asked Assam and Nagaland chief ministers to defuse tension along the borders of the two states where at least 18 people lost their lives in Golaghat districts...