Guwahati: Assam’s veteran artist Khagen Mahanta has been ailing in the city based Down Town Hospital.

According to information, the musician was admitted to the hospital two days back. His condition is said to be stable.
Meanwhile, Assam Chief Minister Tarun Gogoi has announced an amount of Rs 50,000 for his treatment.

Assam: Festive mood in the time of Rongali 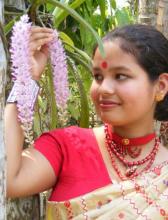 12 Apr 2008 - 4:41pm | editor
If winter comes can spring be far behind? This is what Assam is in for. The much vaunted Rongali Bihu is back on her lap. it is evident from the tender leaves in the trees, flowers in bloom with...

11 Nov 2010 - 2:18pm | Abdul Gani
The maiden edition of the Regional Short Film Festival of India, with the theme ‘The Natives of A Nation’, will be organized by the Meghalaya chapter of North East Film and Television...

Assamese student dies in US

14 Mar 2015 - 1:06pm | AT News
An Assamese student died when he fell from a rocky area in the US as he was wandering at a place along with a few of his friends on Thursday.Identified as Rishabh Chaudhary died in Arizona when...
Follow @Assam Times