The programme took off with the welcome address by Dr. B.P.Sarma, DGM(Medical), Guwahati Refinery and Organizing Chairman. Thereafter, the program was formally inaugurated by renowned Urologist of the North East, Prof. S.C.Dutta. In his inaugural speech, Prof.Dutta spoke of the development of this branch of medical science and stressed on the need for more such academic activities to keep the doctors abreast with the recent developments in their fields of medicine. Homage was also paid to late Prof. J. Dutta, Ex-President of ASA and Dr. J.C.Barua, Ex-Chief Medical Officer of Guwahati Refinery Hospital who left for their heavenly abode recently.

G. Bhanumurthy, Executive Director of Guwahati Refinery was present as Chief Guest in the function and expressed happiness that Guwahati Refinery was able to host such an important academic programme for the benefit of the medical fraternity of Assam. Dr. Kapil Kumar, a renowned Surgical Oncologist from Rajiv Gandhi Cancer Institute, New Delhi joined as Guest faculty and delivered a talk on Colo Rectal cancer. The scientific session was also marked by presentation of papers on various aspects of Cancer and other important topics on surgery.

A Public Awareness Program on ‘Prevention of Cancer” was also organized on the previous day at Guwahati Refinery Training Centre for the benefit of the general public. Dr. Kapil Kumar who was present as an expert delivered a talk on “Cancer Prevention” and interacted with the people participating in the programme. 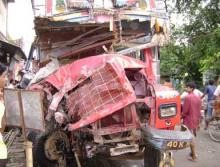 Two tremors jolt in the time of flood

1 Jul 2012 - 10:16pm | editor
Two mild earthquakes jolted Assam and its neighbouring states on Sunday creating panic among the people in the time of flood. There was no report of any loss of life or damage in Assam. But the nic-...

21 Sep 2016 - 11:04pm | AT News
In yet another incident that strike statewide shock and sensation a couple and their son and daughter were believed inside a Guwahati-based hotel where the family checked in on Tuesday. The incident...