One horn terror in Nagaon

Once again one horn terror seems to have gripped Nagaon. A rhino that strayed from the Kaziranga National park creates no less panic among the local residents in Kaliabor on Friday.

Villagers spotted the full grown animal in the open paddy field in the morning and informed the forest department.

On lookers make it difficult for the rhino to find out a safe destination in the morning.

4 Apr 2016 - 9:17pm | AT Kokrajhar Bureau
The electioneering campaign wave to the second phase assembly election slated to be held on April 11 has been seen more gaining momentum among citizens and voters in the lower Assam constituencies... 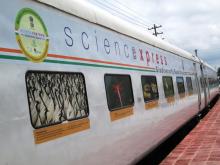