A statelevel convention in Guwahati on Saturday asked both ULFA and the government to come forward for unconditional talk to help the state restore permanent peace. Initiatied by a circle of eminent people of the state led by Dr Hiren Gohain, a panel of experts at the Machkhowa ITA, listens to altogether 112 pressure groups before preparing a list of demands to help the state restore peace in the state. The finalised demands would be taken to both ULFA and the government.

Inaugurating the convention, Dr Hiren Gohain said much have taken place during the last 30 years and its time for the people in general to bail the state and its people out of the crisis. He further urged the people to be aware of the vicious circle trying to stymie the new process.

It may be noted that the PLP on Saturday oppsed the convention saying it will divide the pressure groups who are working hear and soul to end the decade old problem. Significanlty, the ULFA leaders who announced unilateral ceasefire with the government two years back, have not been invited to clear their position.

The convention passed a set of resolutions to expedite the peace process between Government and the ULFA. These resolution include sending an 11-member team to Delhi to put pressure on the Centre to hold talk with ULFA at an earlier date. The convention resolved to urge both government and ULFA to come forward for talk without any condition. Moreover, the convention in a resolution demanded immediate release of ULFA leaders for from jail. 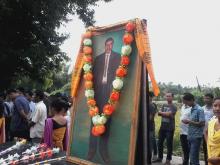