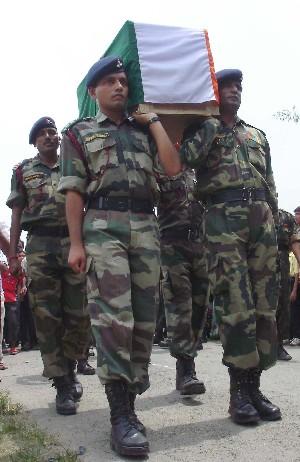 Sivasagar : The frozen dead body of an Assamese soldier, who was killed in a plane crash long back in 1968, has been handed over to his family at Deodhai village in Sivsagar district on Tuesday. His body was recovered from Chandrabhaga peak in Himachal Pradesh on August 2 by an army troops. Army brought Phukan’s body, wrapped in the Indian flag, to his native village which was cremated with full military honors. Phukan is survived by his three brothers Tuben, Durganath and Jiten and their families. The funeral was attended by several thousands of local people, representatives from district police and civil authority, military officers and Jawans.

On Monday the body was flown to Dibrugarh by an Indian flight and then brought to Sivsagar civil hospital Morgue to preserve for the night.

20 Oct 2007 - 11:01am | Rituparna Goswami Pande
Durga puja is awaited with bated breath every year and the goddess is given a tearful farewell every year at the end of the puja, and this year won’t be any different either. Guwahati’s...