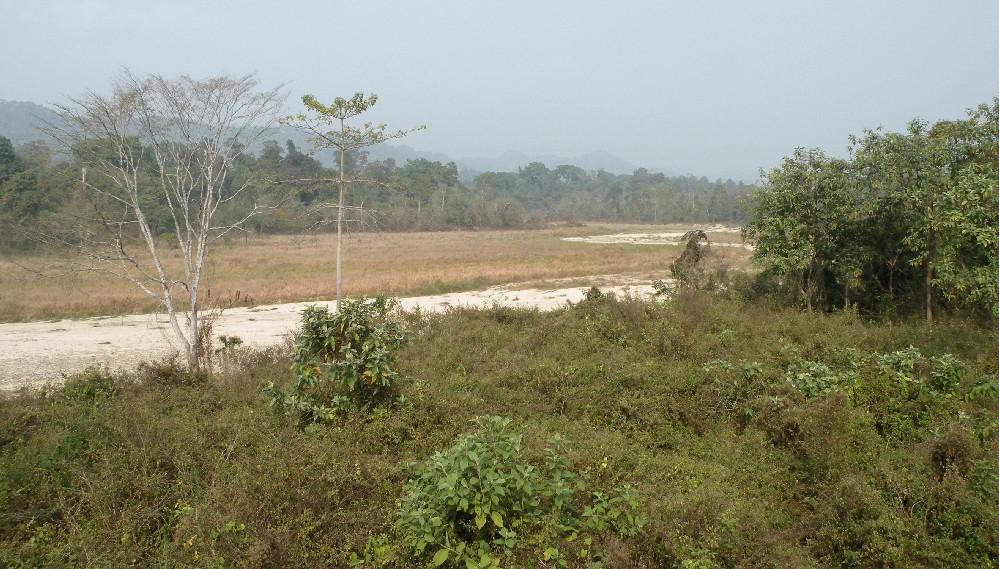 A high level team headed by Dr.SS Meenakshi Sundaram,Deputy Commissioner,Udalguri visited Barnadi wild life sanctuary on February 5 to study its problems. The other members of the team were Bankim Sarma,DFO,Dhansiri Division, Udalguri; Dr.Anupam Sarma and Hiten Baishya of WWF(India) North Bank Landscaping Programme; journalists Jayanta Kumar Das and Debanga Mahaliya;Dipak Baro and Lachit Baro,president and secretary of ABSU Dimakuchi anchalik committee .The team visited most of the areas of the sanctuary; including Shopakana,(on Indo-Bhutan border) Nalanadi,No.2 Pukhuri,Deosunga River etc .During the tour it was observed that ninety percent of the tall valuable trees had been lost. Forest workers informed that large scale destruction of the sanctuary had. been done during 1980 and 1995 period by then SULFA boys, causing serious threat to most of the wild animals and birds including world famous pigmy hog and Hispid hare. Situated in the foot hills of Himalayas, bordering Bhutan in the North of Udalguri district, Barnadi wildlife santuary ( 260 46” 49’ N and 910 45” 31’E;at the elevation of 175 M above sea level )with an area of 28.22 sq km could well have attracted large number of inland and foreign tourists for its exotic virgin beauty, had there been good infrastructures like drinking water, communication system, forest guides etc. The only known abode of pigmy hog (sus salvinous)and Hispid hare (caprolagus hispid),Barnadi wild life sanctuary had been neglected by both state and BTAD authorities since its up gradation to wild life sanctuary in 1980.Earlier it was known as the Barnadi Reserve Forest The sanctuary had been an ideal bhabar tract. The sanctuary has at least 14 species of mammals including Indian elephants, Tiger ,Leopard, Slow lories, Capped langur, Barking deer Gaur ,Himalayan black bear, wild bore, Pangolin, Panticoloured flying squirrel, Assamese macaque, Peacocks, Eurasian otter, fishing cat and Porcupine etc.

Major problems like severe biotic interference, inadequate infrastructure, inadequate man power, lack of awareness among local people ,encroachment of forest lands,lack of proper communication systems etc have posed serious threat to the sanctuary. It is a matter of regret that no tourists visit the sanctuary now a days. During the tour all the inside roads of the sanctuary were seen covered with thick tall grass or creepers making it difficult to move ahead. On the other hand the forest staff stationed in the sanctuary complained that they had no water facility and had to walk a distance of more than 5 km twice a day for collection of water They admitted that for a number of reasons they could not tour inside the sanctuary regularly.

DFO Bankim Sarma, informed the team members thathis department had taken up a few schemes like arrangement of water in the sanctuary, repair of staff quarters, installation of 15 sets of wireless sets, and powerful search lights. But, according to him Barnadi wild life sanctuary had never been allotted sufficient fund allocation for its infrastructure development. Deputy Commissioner journalists and accompanied nature loving people request WWF India to take up a few immediate schemes for Barnadi Wild life Sanctuary. Both the WWF officials agreed to take up the matter and said that they would soon meet to chalk out solution to the problems of the sanctuary. The delegation particularly requested ABSU officials to create awareness among people for the conservation of flora and fauna of Udalguri district.

27 Jun 2014 - 9:08am | AT News
A section of Congress legislators is happy with BPF’s decision to severe ties with the ruling party. Talking to Assam Times, sources said that the party which have absolute majorityhas really no...