Hard core ULFA leader and area commander of 709 battalion, 2nd Lt. Bacha Singh (30) alias Ranojjal Kakati and his associate Bishnu Deka alias Ankur Bania (38) have been killed in an fierce encounter with Udalguri police and 65 Field regiment personals of Red Horns Divisionat Dakhin Bholelikanda village under Kalaigaon police station on the morning of February 3. Army personal told this correspondent on the spot of the encounter that both the motorcycle borne ULFA cadres, armed with huge quantities of arms and ammunitions had taken shelter in the house of Nareswar Deka in the afternoon hour of February 2.On receiving specific information army personals fron 65 Field regiment ambushed the house. When asked to surrender, Bacha Singh retaliated by firing from his 9mm pistol seriously injuring one Lance Nayak Rajindra. Heavy exchange of fire followed causing tragic death of one Lakhya Deka ,minor son of Nareswar Deka, owner of the house. Exchange of fire continued till 6 am of February 3.The bullet ridden dead body of Bacha Sing was found on the floor of the room, near pools of blood where he was killed. The other body of Bishnu was found 100 feet away from the house. But the pools of blood on the verandah could also mean that Bishnu had been injured on the verandah before shot dead.

High level army and police officials from Brigade HQ Hatigarh, Udalguri and Mangaldai had rushed to the spot in the morning and expressed sigh of relieve at the termination of Bacha Singh and his associate. .Army and police recovered a Hero Honda bike, (without number plate); more than 40 mobile SIM cards; one Radio set; one wireless set; three mobile hand sets; two 9 mm chinese made pistols; one AK-56 Rifle; three Chinese made hand granades;several Paresh Barua signed letters and several rounds of ammunitions.

“The death of Bacha Sing would be a severe blow to ULFA” told jubilant army and police officials. after the operation was over at 9 am on February 3 at the spot. Unofficial sources told media persons that both the ULFA cadres had been killed the previous night ;but due to darkness security forces avoided entering the house. Bacha Singh was the son of Hari Singh,retired DI of schools and resident of Mangaldai and Bishnu was an inhabitant of Kaithpara (Dalanghat) under Kalaigaon police station. 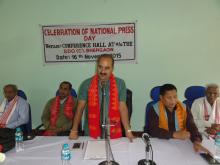 11 Jul 2007 - 3:38am | editor
Tinsukia: There were reports of gunfire along the Assam Arunachal Border in the Sadiya Shantipur area and around 10 people have been injured. The trouble started following a case of physical...

7 Apr 2019 - 7:42am | AT News
Guwahati: The gate-keeping role of traditional media has been questioned by observers, despite the advent of social media where everyone has a say but there is little credible analysis. Reacting to...