Top ULFA leader Raja Bora is likely to be produced before the Chief Judicial Magistrate’s court in Dibrugarh as day after chairman Arabinda Rajkhowa, military spokesman Raju Baruah were sent to jail. Bora, the security guard for Rajkhowa would be produced in connection with a case pending with Jaipur police station. 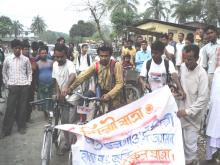 28 Jul 2015 - 1:26pm | Hantigiri Narzary
Dr APJ Kalam’s sudden death casts a spell of shadow in BTAD areas on Tuesday. Cutting across political affiliations along with many organizations have condoled the death of the former President...

4 Jan 2009 - 5:02am | editor
Prime Minister Manmohan Singh has asserted that the government will never go soft with those with gun tryng to foment trouble in the country.Addressing the media in Shillong after he inaugurated the...