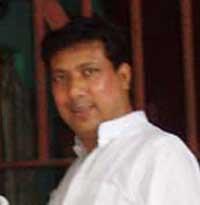 Dhubri police today arrested an MLA Rashul Haq Bahadur with six others. Rashul belongs to AUDF founded by Aagar baron Badaruddin Ajmal just before last assembly election to fight against Congress and subsequently won 10 seats. Rashul has been elected from Dhubri constituency and one of the youngest MLA in Assam assembly. Very recently, he had came to the headlines demanding an Autonomous region for Muslims in lower Assam covering Dhubri, Goalpara, Barpeta, Nalbari and some other parts.

Rashul has been accused in charge of ransacking a temporary Congress office at Dhubri on Sunday morning and threatening Congress workers by frisking out guns. According to police source, MLA Rashul and some other of his follower entered a party office at Jogamaya Ghat in Dhubri town, ransacked it and threatened the Congress workers present in the office by showing a gun. When Congress workers went to the police station Rashul and his supporters rushed to the site and tried to stop them. This caused series of nuisence in the presence of the police and they had to lathicharge on them to control. As soon as Congress workers filed an FIR at the police station booked Rashul and 6 of his supporters. They were arrested on charges of obtaining illegal arms, attempt to murder and extortion under IPC.

Meanwhile, Dhubri Uyanyan Parishad has called a 12 hours Dhubri district bandh to protest against the arrest.

7 Feb 2014 - 10:36pm | AT News
Stunned by the absence of Ataur Rahman Majarbhuyan in the Rajya Sabha polls, AIUDF has suspended its legislator who is on a visit to Saudi Arabia.The decision was taken after the party legislators...