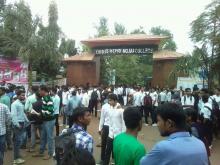 13 Oct 2015 - 9:08pm | Siddhartha Handique
The mortal remains of Prabin Kumar Gogoi consigned to flames after the lifeless AGP veteran arrived in Golaghat on Tuesday.  His fans thronged in thousands at his residence as soon as the body...