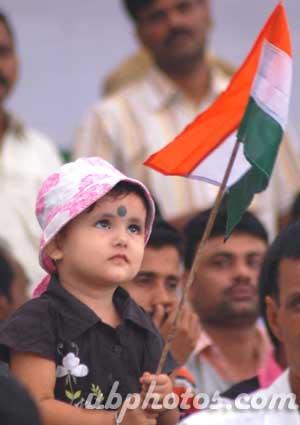 Guwahati: To mark the 61st anniversary of Indian Independence Day, a function was organized on the campus of the Guwahati Press Club on Wednesday. On the occasion, the National flag was hoisted by noted litterateur Nirupama Borgohain and veteran journalist Dhirendranath Chakrabarty led the rituals of paying tributes to the martyrs of the freedom struggle. The function was organized in response to the call given by 16 journalists, who asked the people of the State to celebrate the Independence Day defying the diktats of the militants.

Hoisting the flag, Ms Borgohain underlined the significance of Independence Day celebrations in today's context and she called upon the young generations to emulate the ideals upheld by the freedom fighters. The people should come forward overcoming all threats issued by certain quarters to uphold the spirit of the freedom struggle, she said. In his address, Dhirendranath Chakrabarty paid rich tributes to the martyrs and those who faced all sorts of torture of the colonial rulers to make the country free. People of the country are indebted to these martyrs and freedom fighters, he said.

Meanwhile, residents of various Guwahati localities also demonstrated great zeal in upholding the cause espoused by the freedom fighters of the country on the occasion of the 61 st Indian Independence Day. On the occasion, they organized community celebrations at their respective localities with great enthusiasm and hoisted the national tricolour also atop their houses. Residents of Ulubari organized a function at the Ulubari Chariali near the Bishnu Rava Flyover. Captain Rabin Bordoloi, MLA from East Guwahati constituency hoisted the flag.

Hoisting the flag, at Kumarpara Pachali, former Vice-Chancellor of Tezpur University Prof Kishorie Mohan Pathak called upon the people to organize community celebrations on the occasion of the Independence Day and Republic Day. Community celebrations on such occasions are very important to keep the democratic polity of the country vibrating, he said. In the Kumarpara-Athgaon area, public functions to celebrate the occasion were also organized by the GMC Ward No 19 Nagarik Committee and the Athgaon Pukhuripar Yubak Sangha. Public celebrations on the occasion were also organized at Fancybazar, Belotla, Chunchali, Maligaon, Maligaon Goshala, Pandu, Adabari etc places. Bharosa, a Pandu-based NGO, organized a blood donation camp on the occasion.

25 Sep 2012 - 2:57am | editor
Krishna Kanta Handique Open University is gearing up for introduction of post graduate courses in a number of subjects from 2012-13 academic session. Addressing a press conference in Guwahati on...