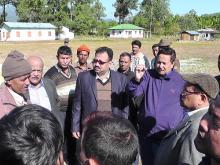 25 Dec 2014 - 9:39am | AT News
The trouble seems to have spread beyond Kokrajhar and Sonitpur a day after the carnage that left around 70 killed on Tuesday. The militants unleashed yet another reign of terror in Udalguri leaving...

Message of peace before Christmas

17 Dec 2008 - 4:28pm | editor
Gun will fall silent in Nagaland if the peace message that runs across the north eastern state is any indication. Festivity grips the state as the Christmas is round the corner. Only a few days are...