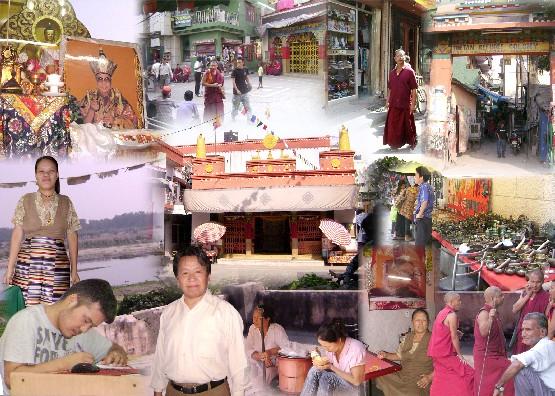 New Aruna Nagar, Delhi – 54. One of the oldest Tibetan colonies in India. The settlement dates back to 1959. Being from the North-East, I often hear stories of discrimination of the students and people from the region in Delhi. I have been always curious whether it is a mental block ingrained in an average North-Easterner, an illusion/ a myth promoted by jingoistic regional media or a reality. This urged me to find out what is it for the Tibetans who have been in India since the Chinese clampdown in Tibet.

The area is near the Gurudwara Majnu ka Tila along the Grand Trunk Road, on the banks of the River Yamuna. The present Chief Minister of Delhi, Shiela Dixit has named the colony as New Aruna Nagar.

I walked into the Tibetan colony. I was moving along the narrow lane. A turn towards the left and as I took a few steps, I landed upon a Square--- an open space with a Buddhist monastery. Towards one of its side, there were eateries selling momos and one ‘proper’ restaurant which offered authentic Tibetan dishes. Behind the Buddha Vihar, lanes forked, turned, merged and got narrower taking to a entirely different township, just across the National Highway. It was shops all along and residential abodes above. There were stalls selling cutlery, jewellery and idols of the Buddha on the relatively broader lanes. One shop was blaring Tibetan songs. A few youngsters and teenagers gathered to see a music video of a popular Tibetan number. This is home away from home, a Little Tibet in Delhi.

I went to the Samyeling Tibetan Settlement Office where I met Mr. Lekyi Dorjee Tsangla, the settlement officer. He is a second generation Tibetan in India. His parents moved to the country in 1959. He was born in Tezu, Arunachal Pradesh and has been living in different places in India since his schooldays. He gave a bit of his mind when he said that they face hostility from the locals in Arunachal Pradesh who want them out of the state. Luckily, I found a guide in Nyina Choedon, a 23 year old nurse from Hyderabad. The young Tibetan girl said she is also new to the place and is on a vacation. She was staying in a lodge and took me to its terrace to have a look at the Yamuna. On being asked if she faced any unpleasant experiences in Delhi or in Hyderabad because of her different looks (‘alien’ as some like to put it), she said promptly, “Not once. I am born and brought up in India. This is my home.”

The confidence of Nyima Gyaltsen (26), Tashi Tsering (22) and Namgyal Tenzin (27) were equally strong. All are students in different institutions in the city. Gyaltsen and his family moved to India from Tibet in 1993. He recalled, “We entered through Nepal. We walked. Sometimes we got a bus. Such was our journey. India is our second Home.” Tashi added in a lighter vein, “Out there in Tibet, life is like playing hide-and-seek with the Chinese.” When asked if they were called names, there was a reply, “At times we come across people who call us Chinks, but again they have formed terms for South Indians too. You must be knowing that Malayalis are called Mallus in Delhi and so on. We don’t take offence and have learnt to take it as a compliment, a part of what we are….slanted eyed.”

I had a date with Tibetan cuisine in the restaurant Bathang located at the Square in the colony. Ms. Passang, a middle aged lady prepared me a plateful of steamed momos and a nice cup of tea. It was late in the afternoon, not the rush hour. A few family members of the restaurenteur were chatting as they looked out of the window towards the Square. I met the brother-in-law of Passang, Mr. K. Tashi (58) who was an eloquent and interactive person. He had many experiences to relate. They had a restaurant in Shillong. But they shut down their business in Meghalaya, and moved to Delhi in 1993. He has been witness to the mood swings of the Khasi Students Union and recalled how non-Khasis are not welcome out there. But Mr. Tashi’s face brightens when he speaks of his new home city, “Delhi is the Real Capital. Here no one can say ‘Get Out’. The place accepts all. There is space for everyone. This is ‘Our Delhi’.”

Then there was Sherab Tsultrim (29), who was into business. When asked about any racial discrimination in Delhi, he replied, “Racial ? …It cannot be termed racial. One or two naughty pranksters in cinema halls call me Nepali, Kancha or Daju…it is harmless fun.” I was tempted to ask, “In which country do you find feel at home--- China or India? Which makes you feel near home?” Sherab Tsultrim said with a smile, “India APNA lagta hain” (“India feels like home”).

For all the people who complain of the ‘stepmotherly’ treatment of the Centre (Delhi), for all the insurgents and secessionists of North-East India who seek arms and ammunition from China, a visit to New Aruna Nagar is a must. Next time you pass by this part of the country, see that this Tibetan colony in Delhi - 54 falls in your list of tourist destination. Here, there are people who have had a taste of the ‘stepfather’ China.

Permalink Submitted by Anupa Lahkar on Sat, 24/10/2009 - 15:59
Well it clearly sends a message across......great introspection. Maybe its our mental block which is our greatest enemy.

Permalink Submitted by Pallavi Barua on Sun, 25/10/2009 - 12:27
When Aman Kachroo died of ragging, media reported it as 'Medical student ragged to death in Himachal Pradesh'. Had it been an Aman Jamir or Aman Lyngdoh, reporters would go for 'North-East student ragged to death in Himachal Pradesh'. When a Punjabi girl is raped in Delhi, the newspaper reads 'Girl raped in capital'. However, if she is from Mizoram, it goes as 'North-East girl raped in Delhi'. Rape is related to her sexuality, not the place to which she belongs. But, in most cases, we see that, Region comes before the Person. This is what I term as 'Mental Block'.

Permalink Submitted by SARADA on Mon, 26/10/2009 - 07:38
Luckily India has been a country where everyone's accepted....itz a few who discriminate and dats wht makes news... a positive story and a well researched one. Keep it up.

Permalink Submitted by Raktim on Sat, 31/10/2009 - 09:16
If Delhi is so unsafe for north-east girls, its better girls study and work in Bangalore. The city of Bangalore is safer. The people are also educated and cultured.

12 May 2014 - 8:37pm | AT News
No major setback awaits Congress in the Lok Sabha polls if the exit polls are any indication.CSDS-sponsored exit poll has projected 40% vote share for the ruling party 1% up from 2009 Lok sabha polls...

4 May 2012 - 10:09pm | Anup Biswas
The 61st Foundation Day of the Dima Hasao Autonomous Council was celebrated in a grand manner. The 2 (Two) day long programme started from 28th April where the Chief Executive Member of Dima Hasao...

New party in the offing

29 Jun 2015 - 1:10pm | AT News
Dissident Congress leaders are holding a convention in Guwahati on July 26 to float a new party. Bora told reporters that they would try to float a party to help the people. He further appealed...