Guwahati : A 12 hour long statewide Assam bandh disrupted normal life in the state from early in the morning. The Bandh was called by a forum of 12 political parties to protest against the killings of Hindi-speaking people by the ULFA and KLNLF militants in Karbi Anglong district. The Bandh is total and barring a few stray incidents, the situation is reported to be normal.

Our Correspondent from Diphu reports: The 12 hour Assam bandh is total. People are remaining inside their homes. But some people came out to see Union minister Sri Prakash Jaiswal in the morning when he arrived to take a stock of the prevailing situation. These people, mostly Hindi speaking, came out to see the minister to impress upon him the need for increasing security in the area.

Our Correspondent from Silchar adds: The Bandh had no impact in all the three Barak valley districts. Schools and offices are running normally.

A forum of 12 political parties had called for the bandh to protest the killing of the Hindi-speaking people in Karbi Anglong district. The parties included the Asom Gana Parishad-Progressive (AGP-P), Assam United Democratic Front (AUDF), CPI and CPI(M) amongst others. The business body, Kamrup Chamber of Commerce, had also backed the bandh. 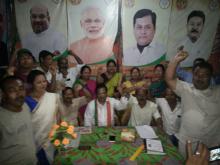 10 May 2017 - 10:16pm | Shajid Khan
In a bid to to protect, preserve and promote the cultural heritage,historical and traditional aspects and folklore of Koch-Rajbongshi community Bwisuwa Utsav was celebrated with a day-long event here...

10 Nov 2012 - 4:53am | editor
The November 18 India-Yemen match in Guwahati was cancelled. According to All India Football Federation, they received an email from the Yemen Football Association that their players' tickets 'were...