The first biennial general conference of Assam Agricultural Officers Association (AAOA) will be held from 13th to 14th September, 2009 at the Krishi Niwas, Directorate of Agriculture, Assam, Khanapara, Guwahati. Pramila Rani Brahma, Agriculture Minister and Akon Bora, Social Welfare and Jail Minister will grace the occasion in the open session on 14th September at 1.30pm as chief guest and guest of honour respectively. A workshop on ‘Management of drought like situation in Assam with reference to horticulture crops’ will be held on 13th September , 09 at 10am, which will be inaugurated by Mrigendra Kalita, Secretary to the Government of Assam, Agriculture Department. Dr.Bangshidhar Kalita will deliver the keynote address in the workshop. The delegate session will be inaugurated by Dr. P. Kalita, Director of Agriculture, Assam on 13th September, 09 at 2.30pm. Niraj Verma, State Project Director, ARIAS Society, Assam ; Dr. H. Barooah, Director, Horticulture & Food Processing, Assam ; Dipti Deuri Bora, Joint Secretary, Agriculture will also grace the conference. Dr. D. Borgohain, President, AAOA will preside over the general conference and Kailas Barman, General Secretary , AAOA will present Secretarial Report. A souvenir will also be released to mark the conference.

13 Oct 2008 - 2:08am | editor
It is amusing to see note that Health Minister Himanta Biswa Sarma thinks that the NDFB has hoisted Pakistani flag in Udalguri. I hope he knows that as soon as this act was done, the flag hoisting...

5 Nov 2007 - 4:26am | Dibya J Borthakur
The people of Raha,in Nagaon district have warned the State Fishery minister Noorjamal Sarkar against his decision to transfer the Fishery College based at Raha, established on March 7 in 1988, in... 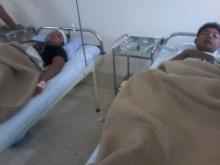