An NDFB rebel was killed at an encounter in Kokrajhar district on Wednesday. The encounter took place at Taraibari under Kokrajhar police station early in the morning as a joint team of police and security forces was launching an operation in the area on a combing operation launched acting in a tip off that hardcore NDFB rebels were staying in the area. It heavy gun battle took place only in the morning on Wednesday where the the militant was killed. He was identified as Nikil Brahma--the self styled sergeant major of the anti-truce faction.
A 9mm pistol, 4 timer device made in China, 8 detenators, 14 nos of extortion notes in the name of some business men still plates, spoons were recovered from the spot. According to Kokrajhar SP P K Dutta, police has specific inputs of NDFB bid to explode powerful bomb in the area.

Permalink Submitted by Satyen on Wed, 19/08/2009 - 05:57
Why doesn't the govt forces hunt down MULTA or Muslim terrorists in Assam? These Islamic terror groups are spreading in other parts of North East too.

29 Nov 2017 - 8:33am | AT News
GUWAHATI: An uneasy situation prevails in the Ledo a day after a gang of Naga rebels unless terror at a coal mining forcing the authority to step in with adequate force. The epicentre is... 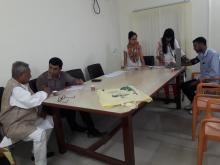 21 Nov 2016 - 11:38am | AT News
The city based Wintrobe hospital on Saturday conducted the 'Evening with a Doctor' program at Guwahati Press Club, where Dr Nitin Gupta (Urology) provided free consultations to the GPC members along...