Assam powerful students’organisation Assam Students Union will sit in hunger strike on August 14 and 15 in protest against the failure of the government to implement the Assam Accord.

Addressing a press conference in Guwahati in Wednesday, AASU leaders said only this will over the years, the government has been failing to deal with influx of Bangladeshi immigrants, border problem, along with some other burning issues. AASU general secretary Tapan Kumar Gogoi said Prime Minister Dr Manmohan Singh and Chief Minister Tarun Gogoi have been failing to do the needful.

Permalink Submitted by D N Singh on Wed, 12/08/2009 - 13:34
The students body only remembers the Assam Accord from time to time with long gaps, but keeps silent for years together. The politicians reap the fruits of this weaknes of AASU and think its' leaders would forget every thing in due course

17 May 2016 - 8:32am | AT News
The city based scribes on 16 May assembled in a protest demonstration at the front of Guwahati Press Club to condemn the brutal killing of two scribes in Bihar and Jharkhand last week. Covering their... 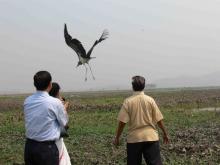