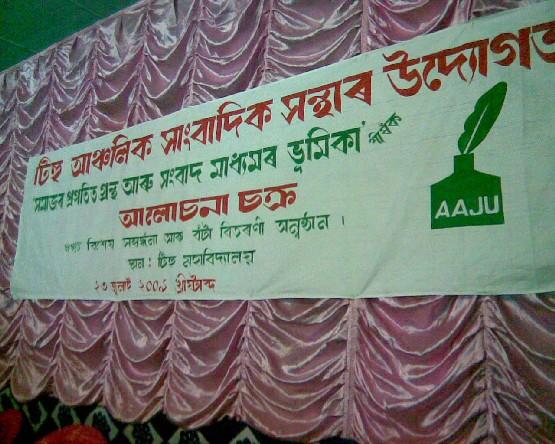 Media and books should (must) play a vital role in guiding the society for sustained growth and intellectual upliftment. Both the mediums should also continue engaging the common people for a better future addressing their hope and aspiration, argued DN Chakrabarty, a senior journalist of Assam during a discussion held in Tihu of Nalbari district.

Addressing a public meeting in the premises of Tihu College on July 23, Chakrabarty also appealed to the conscious citizens to come out with the commitment and dedication for their respective roles. The former editor of ‘Dainik Asom’ also cautioned the media persons ‘not to be vulnerable’ to the motivated and powerful elements in the society, which might finally ruin the medium.

The meeting, organized by Tihu Anchalik Sangbadik Santha, which was established in 1988 and now affiliated by All Assam Journalists’ Union, was also addressed by another journalist Nava Thakuria. Talking about the changing faces of media, Thakuria urged the reporters to take the advantage of the new technology for the professional upliftment.

Presided over by Prankrishna Das, a senior journalist, the discussion on the role of media and the books on social upliftment, witnessed varied discourses on the media and the literature.

A chorus with the theme of media and the society, penned by Hemanta Talukder, where the local girls took part, was presented before the meeting. Local students were also awarded with prizes, who participated in the painting competition on the occasion. Earlier in the morning, the organizational flag was hoisted by Prankrishna Das and Swahid Tarpan was conducted by Girindra Nath Sharma, the principal of Tihu College. It followed by the plantation program, which was led by Chanakya Charan Kalita.

12 Jul 2015 - 12:27pm | AT News
Chief Minister Tarun Gogoi mires in yet another controversy over the proposed AIIMS two days after his government cleared a huge plot in the outskirt of the city for the project.Talking to reporters...

National Seminar on Gender and Democracy in Northeast India

4 Dec 2013 - 12:50am | Jayanta Krishna Sarmah
The Department of Political Science, Gauhati University, Guwahati, Assam has been organizing a UGC–SAP sponsored National Seminar on Gender and Democracy in Northeast India on March 4-5, 2014....